It’s all about timing: A lesson from Derek Ingram 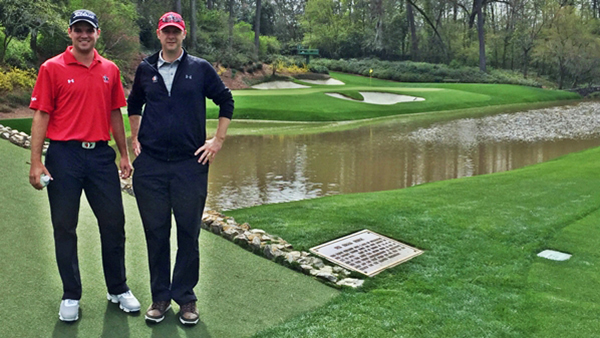 Playing in the Masters for the first time—let alone at any time—is a tall order for any athlete. It’s no walk in the park for coaches, either.

Team Canada Men’s Head Coach Derek Ingram put his best foot forward in the months leading up to the Masters, helping Canadian star Corey Conners live and breathe in the moment as one of seven amateurs in the field.

Ingram, also attending the Masters for his first time, narrowed his focus to the simple mantra of just “putting the ball in the hole.” Sometimes, in the grand scheme of a major tournament, it’s the small things that count.

“You need to remind yourself that this is about Corey Conners and him putting the ball in the hole,” said the Winnipeg native. “Everything to do with every second of every day revolves around making sure you are supporting his cause. And then, it’s remembering not to over-coach, not to panic and to be patient.”

Looking back, he explained it’s not an easy task for coaches to always be prepared with the best thing to say in a 12-14 hour day.

“You never know which thing you say, or do, throughout that long day that’s going to make the biggest difference. Timing is everything—and remembering that it’s alright to be quiet sometimes,” said the PGA of Canada class ‘A’ member.

The 23-year-old Conners earned his ticket to Augusta National by finishing runner-up at the 2014 U.S. Amateur Championship. The Listowel, Ont. native finished as top-performing amateur, a feat that impressed—but did not surprise—coach Ingram.

“The highlight was watching Corey shoot a 69 in the second round and just seeing him play like I know he can,” he said. “Doing that on one of the best golf courses and at the most important golf tournament in the world is something special. But that’s how strong his game can be.”

Conners, a graduate of Kent State, turned professional this week at the RBC Heritage, transitioning to Team Canada’s Young Pro Squad in the process. With Conners turning professional, the Young Pro Squad now features five male athletes—which Ingram sees as both a positive sign and a new challenge.

“Firstly, I’m very pleased that we have a Young Pro program. We’ve got five really good young players,” he said. “It does pose a challenge for me because of the difficulty in getting out to the events for the wide variety of tours, but these guys are very strong players and I’m proud of what we’ve done to support them.”

When asked if he was able to sneak in a shot or two at Augusta, he laughed it off.  “My job being there was to provide Corey with all the support I can possibly give—so I didn’t find the time,” he said. “They also have some pretty tight guidelines at Augusta,” he laughed. “Maybe next time.”