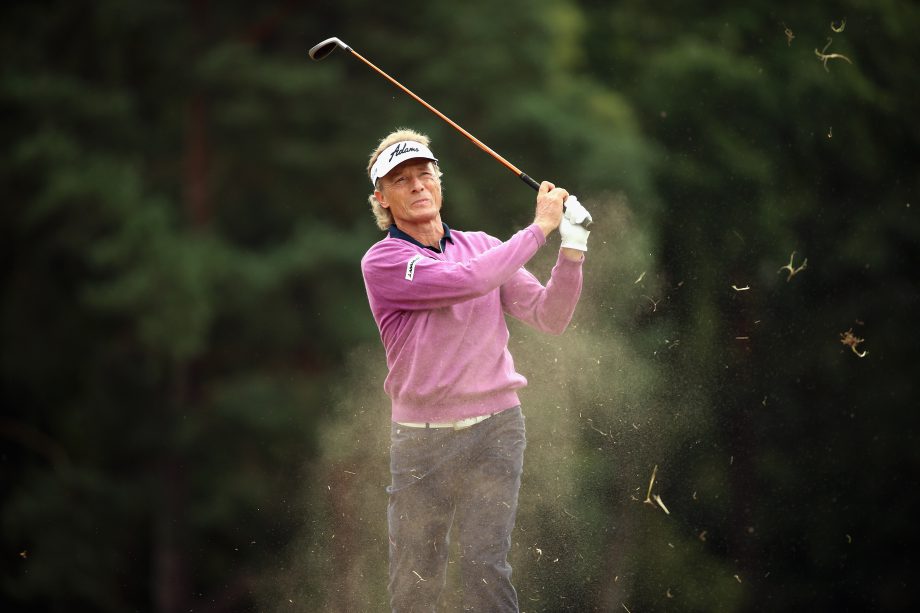 SUNNINGDALE, England – Two albatross twos were recorded on the same hole on a memorable opening day at the Senior British Open, where defending champion Bernhard Langer finished in an eight-way tie for the lead at 5-under-par 65 on Thursday.

The albatrosses at the opening hole, a first time in senior tour history, were by England’s Barry Lane and American Steve Jones.

Langer birdied the first, dropped a shot at the sixth, but birdied eight and nine to be out in 33, before picking up further birdies at 11, 14 and 16 to be back in 32.

“I didn’t feel totally comfortable with my swing, but my putting was very good and I didn’t make any major mistakes,” said Langer, the winner a year ago by a massive 13 strokes at Royal Porthcawl in south Wales.

Bryant, out in the fourth group at 7:30 a.m., was the first man to post 65, picking up six birdies and dropping just one shot.

“The course was probably in the most scorable condition it will be all week,” Bryant said. “We had no wind through the first 13 or 14 holes, and the greens were soft.”

Sluman was next in with a 65. He started with an eagle and two birdies to go 4 under after three, but had two bogeys before getting to 5 under with three more birdies.

Allen got his round going with a first-up eagle, while Janzen, despite sharing the lead, was disappointed with his putting.

Lianwei also eagled the first, and was out in 29. He dropped two strokes at the 12th when he found trouble off the tee, then birdied the 14th, and parred home to be back in 36.

Welshman Mark Mouland led the home charge on 66 alongside American Brian Henninger and Argentine Cesar Monasterio, while Colin Montgomerie was in a group of eight on 67 with playing partner Tom Watson.

Fred Couples, the 2012 champ, was in another large group on 68, while Jeff Maggert, twice a major winner on the U.S. senior tour this year, managed only a 1-one 71.