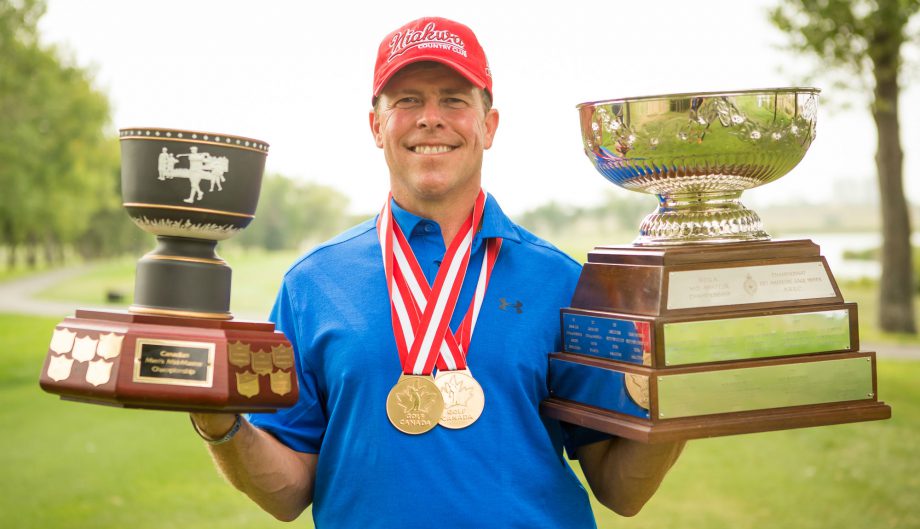 REGINA, Sask. – Todd Fanning shot a 2-under-par 69 on his way to winning the Canadian Men’s Mid-Amateur Championship at The Wascana Country Club on Friday.

The 49-year-old from Winnipeg, Man., captured gold-medal honours in both the Mid-Amateur and Mid-Master division to capture his third career national amateur competition.

“What an amazing week,” he said, on the first green and final playoff hole. “I won a couple Canadian Juniors back in the mid 80s and to win another provincial and then follow that up with a national title is a dream come true for me at 49,” said Fanning, who captured consecutive Canadian Junior Boys Championships in 1985-86.

Fanning, who also won the 2017 Manitoba Mid-Amateur, won after a four-hole playoff against three-time champion Garrett Rank (Elmira, Ont.) and 54-hole leader Steven Diack (Coquitlam, B.C.), who entered the final round leading Fanning by five strokes and Rank by eight.

After the group made the turn, Rank and Fanning aggressively closed the gap.

“That was amazing,” said Fanning. “When I saw Rank drive it on the 10th green I knew he was going to come guns a blazing. After that, he and Diack were trading birdies and I was kind of just getting dragged along, but luckily I got a big break when I birdied 18 to force the playoff.”

“The last hour and a half I sunk every putt I looked at and that’s how you have to win.”

Prior to the playoff, the final group approached the final tee with Rank and Diack tied at 10 under par and Fanning sitting one stroke back. The co-leaders both missed the green with their second shots and Fanning found the fringe to set up an eagle opportunity.

Diack came within inches of holing out a chip for birdie which would have won the tournament in regulation, and moments later Fanning thought he had the win as his eagle putt skimmed the lip of the hole – Fanning had his arms in the air and was walking the putt in when he realized it missed.

“I hit the best putt I had all day, it was kind of breaking right and just skimmed the edge and stayed out,” he said. “Hands were up I was walking it in. I gave it the curse but after that I settled down and in the playoff hit some good shots.”

Diack was the most consistent golfer in the field through three rounds, but during the final round he shot a 3-over-par 74, his only round over par during the championship.

“It was pretty crazy,” said Diack. “Those guys came on strong. They both played such good rounds of golf today and under pressure they hit such good shots. I could feel them coming and I was kind of going the opposite way.”

“Obviously I would have loved to take it today, but it was such a good experience to go down the stretch with those guys and get in a playoff. It was lots of fun.“

Both Diack and Fanning registered birdies during the first playoff hole while Rank settled for par and was knocked out of the tournament. The two remaining golfers both had opportunities to win the championship over the next three holes, but it was the 49-year-old who bested the 25-year-old with an eight-foot putt for par.

Rank had the most impressive round of the day after he shot a 5-under-par 66. The 29-year-old won the championship in each of the last three years and made a stellar effort to become the first person to ever win four times in a row.

For much of the day, it looked like a two-horse race between Fanning and Diack, but Rank aggressively chipped away at the lead on the back nine where he made five birdies.

In addition to the Canadian Men’s Mid-Amateur title, Fanning receives an exemption into the 2018 RBC Canadian Open at Glen Abbey Golf Club in Oakville, Ont.

On Wednesday, Team Ontario defended their inter-provincial title after they defeated the hometown favourite Team Saskatchewan in a playoff that secured the R. Bruce Forbes Trophy for the third straight year.