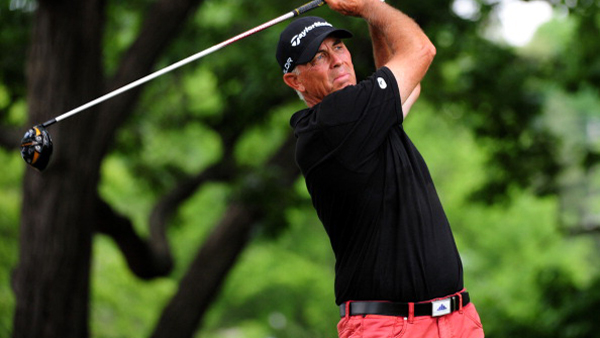 GLENVIEW, Ill. – Tom Lehman opened a three-stroke lead Saturday in the Champions Tour’s Encompass Championship, shooting a bogey-free 6-under 66 before play was suspended because of a thunderstorm.

Lehman had a 13-under 131 total at North Shore Country Club, playing the first 36 holes without a bogey. The 55-year-old Minnesotan won the last of his seven senior titles in 2012.

“It’s been a while since I had one bogey-free round, and to do two in a row is special,” Lehman said. “I haven’t missed many putts inside 6 feet. If you were to rate whether I’m making the most of my opportunities, I think you’d say I’m doing pretty well.”

The 1996 British Open winner chipped in from 20 feet for a birdie and made five putts, the longest from 7 feet, for his other birdies.

Thirty-one players were unable to finish the round.

Kirk Triplett, John Inman, Roger Chapman and Bart Bryant were 10 under. Triplett and Inman shot 67, Chapman had a 68, and Bryant had two holes left when play was washed out for the day. Bryant was 5 under for the day.

Triplett hit 14 greens, one-putted seven of them and chipped in for birdie on another.

“There are plenty of birdie chances here,” Triplett said about North Shore, hit by hard rain early in the week and another shower Saturday. “The greens are not going to firm up.”

Inman advanced to the quarterfinals in the 1983 U.S. Amateur at North Shore.

“I came out here and I didn’t remember a hole,” Inman said.

Michael Allen was four strokes back at 9 under, also with two holes left.

Colin Montgomerie, the Senior PGA Championship winner in his last tour start, was 5 under for the day and 8 under overall with two holes left.

Defending champion Craig Stadler was 1 over with two holes remaining.

Canada’s Rob Spittle shot 73 Saturday to place him among a group tied for 34th.