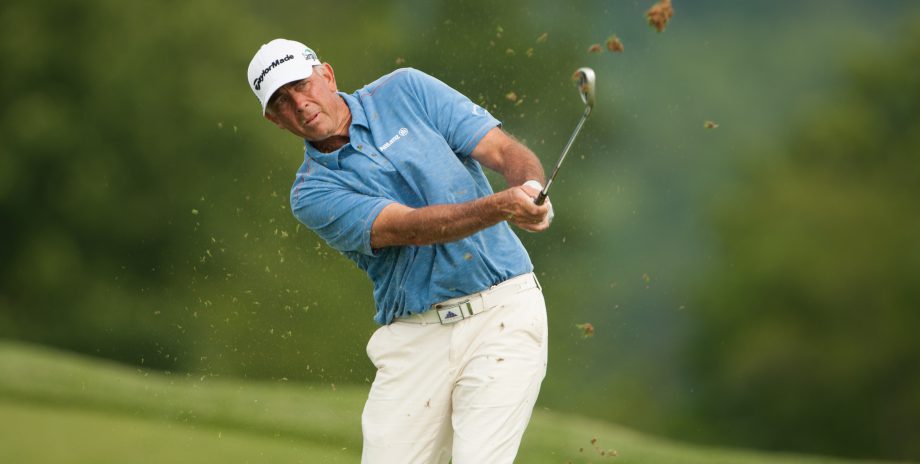 FRENCH LICK, Ind. – Tom Lehman started the second round of the Senior PGA Championship on the 10th tee Friday afternoon. He might as well have started it on a launch pad.

Lehman birdied three of his first four holes on French Lick Resort’s rigorous Pete Dye Course and kept right on going. He shot a 5-under 67 – matching the best round of the week – to take the lead at the halfway point of the Champions Tour’s second major championship of the year.

At 4 under, Lehman led his playing partner of the first two rounds, defending champion Colin Montgomerie, and Brian Henninger by a stroke. Montgomerie shot 69, and Henninger matched Lehman’s 67.

The severity of the course has caused some players to grumble about Dye, its designer. Not Lehman.

There have been only seven rounds in the 60s, all of which came with milder weather conditions prevailing Friday, when tournament officials trimmed more than 100 yards off the first-round setup, from 7,040 yards to 6,914.

Montgomerie relished the buzz of playing with the leader, and he wants more.

“We stood in there battling around,” Montgomerie said. “I’m going to play with him (again) tomorrow, probably in the last group, and I look forward to that.”

Lehman won the British Open in 1996 and the Senior PGA Championship in 2010 in Colorado. Montgomerie dominated the European Tour during the 1990s, topping the money list eight consecutive seasons. In addition to the Senior PGA, he won the U.S. Senior Open last year.

Esteban Toledo was 2 under after a 68. First-round leader Massy Kuramoto had a 72 to drop to fifth at 1 under. Peter Fowler, Woody Austin and Jean Francois Remesy were even par. Fowler birdied the final hole for a 67, Austin shot 71, and Remesy 72.

Henninger and Toledo were PGA Tour journeymen. Being situated so near the top of the leaderboard and doing it on so daunting course in a senior major was not lost on Toledo. It’s new ground.

The early starters again went off with temperatures in the upper-40s but the sun shone brightly and the day warmed into the mid-70s, although wind made club selection difficult and misses frequent.

Toledo made five birdies and a lone bogey. The Mexican player has thrived on superior ball-striking, hitting 21 of 28 fairways and 26 of 36 greens in regulation.

Bernhard Langer, a 23-time winner on the Champions Tour, was 1 over after a 72.

The Dye Course’s severe slopes and radical bounces can get to a player. Mark Calcavecchia parred the 566-yard, par-5 ninth hole Friday, but it was anything but routine.

Calcavecchia drove into the left rough and, after hitting a second shot he deemed unacceptable, broke his club over his knee. He missed the green with his third shot and snapped the shaft on that club by slamming it into the ground. Calcavecchia missed the cut, finishing at 14 over after a 77.

Rod Spittle was the lone Canadian to make the cut. The St. Catharine’s, Ont., native is 8 over and tied for 66th heading into the weekend.