Tom Watson: ‘The only regret I have is that it’s the end’ 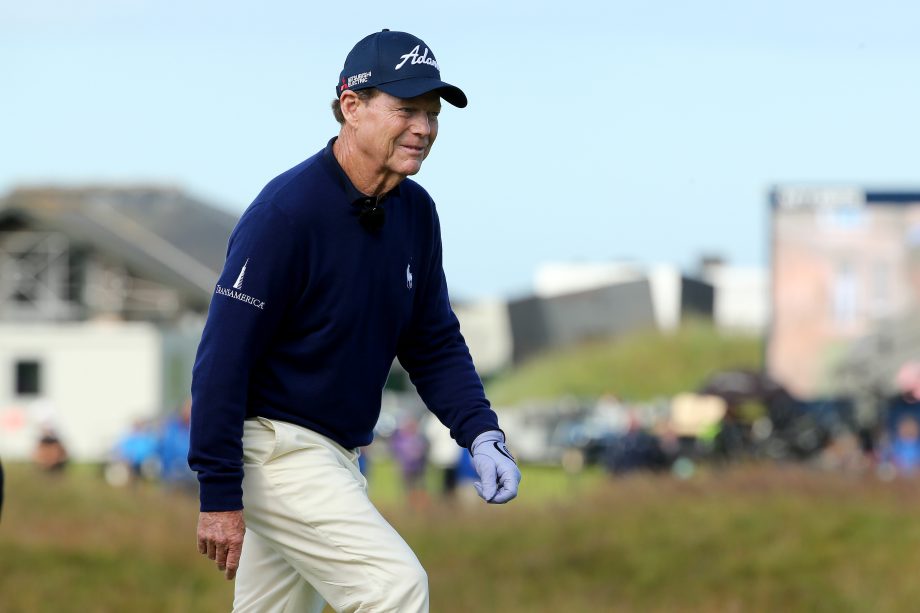 ST. ANDREWS, Scotland – Tom Watson is filled with all sorts of conflicting emotions.

He’s melancholy that such a big part of his life is winding down, yet there’s an immense sense of pride in what he’s accomplished.

He’s realistic that it’s the right time to step away, but he can still flash that ol’ competitive streak when anyone suggests this is nothing more than a nostalgic farewell at the home of golf.

“This is not a ceremony at all,” Watson said Wednesday, his eyes steely and firm. “I’m trying to compete against these players out here.”

Some of them, such as Jordan Spieth, are young enough to be his grandchildren.

Which is why, in all likelihood, the 65-year-old Watson will be playing the British Open for the final time, a five-time champion making one last crossing of the Swilcan Bridge.

“There are some tools missing now, especially distance,” he moaned. “I need everything to compete against these kids,” pausing for emphasis. “Everything.”

Watson could earn the right to play another five years if he finishes in the top 10 this week, an exception that was hastily added to the Open’s 60-year-old age limit after he nearly became golf’s oldest major champion at Turnberry in 2009. Watson went to the 72nd hole with a one-stroke lead, only to make bogey and lose to Stewart Cink in a playoff.

That one still stings a bit, but Watson doesn’t spent too much time dwelling in the past.

When he does, the mind inevitably drifts to all the good times he had during the past four decades on the links courses of Scotland and England, a brand of golf he initially despised for the inexplicable bounces and the persnickety weather, for a capriciousness that was very much at odds with his desire to be precise in everything he did.

That would change, of course, as a victory at Carnoustie in his very first British Open in 1975 would lead to another two years later at Turnberry in the famous “Duel in the Sun” with Jack Nicklaus. Another title followed at Muirfield in 1980, then back-to-back wins at Troon and Birkdale in 1982 and `83. The claret jug would come to define his career, the Open providing five of his eight major titles and transforming this stoic man of the American Midwest into a beloved figure on this side of the Atlantic.

In recent days, Watson reflected on many of the people who passed through his life because of this tournament, going all the way back to his first Open as he prepared to face Jack Newton in an 18-hole playoff.

“I was leaving the house, and it’s raining, it’s cold, and here comes a little Scottish girl, comes up to the front door and says, `Mr. Watson, please take this for good luck,'” Watson said, his lips curling into a slight grin. “I could barely understand her, but I finally figured it out. She gave me a little thing of tinfoil, and in it was some white heather. I kept that in my bag for many years for luck, and it brought me good luck. But I remember that little girl.”

Watson also remembers an immigration worker at Prestwick Airport near Glasgow, a frequent entry point into the country early in the golfer’s career. The man spoke with a thick Scottish accent that Watson never quite deciphered, but it didn’t matter. They were able to connect on a different level.

“We were friends for years and years, a man whom I never understood, but understood that he liked me and I liked him,” said Watson, his eyes watering just a bit.

“There is a certain sense of melancholy. You can sense that. The regret that it’s over,” he said. “It’s a little bit like death. The finality of the end is here. But what tempers that very much are the memories and the people I’ve met along the way.”

Another big part of his life will end next spring. Watson decided this was also the right time to announce that the 2016 Masters will be his last, his decision influenced in large part by a second-round 81 at Augusta National this year.

While Watson’s competitive nature would never allow him to totally rule out another turn-back-the-clock performance in the British Open, he knows this will surely be his final trip across the Swilcan Bridge, an emotional crossing that so many greats have walked before him, from Arnold Palmer to longtime friend and rival Nicklaus.

In fact, Watson was paired with Nicklaus for his final British Open a decade ago. That day, the younger man bawled his eyes out as the Golden Bear walked up the 18th fairway.

There will surely be a few more tears shed this week, whether Watson’s final shot comes on Friday or if he manages to hold off the inevitable until Sunday.

“Do I have any regrets?” he said. “The only regret I have is that it’s the end.”