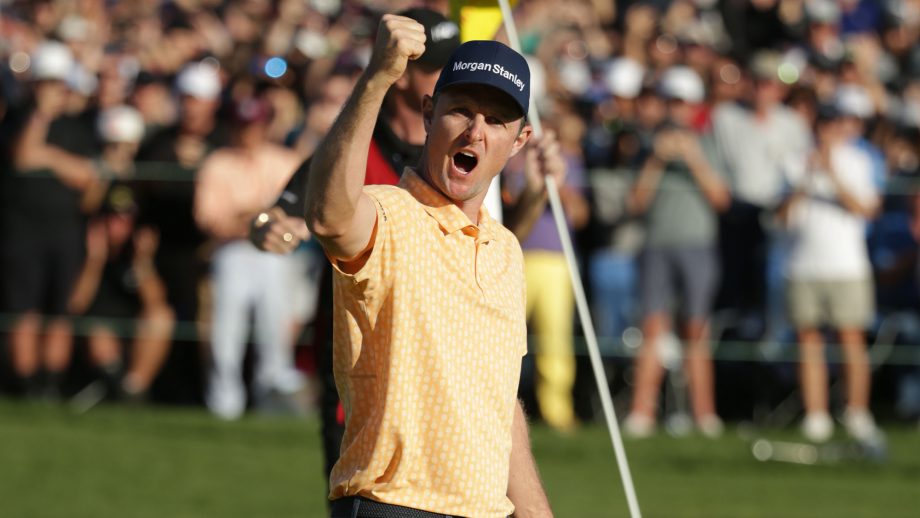 SAN DIEGO – Justin Rose missed a short birdie putt that felt like another bogey. His three-shot lead was down to one through six holes of the Farmers Insurance Open, and the biggest battle was trying not to panic.

That’s when he scratched a line on his scorecard after six holes, wanting to start his round from that moment forward.

And he gave himself a pep talk.

Rose followed with a perfect wedge to a right pin that led to birdie, the first of five birdies the rest of the way for a 3-under 69 and a two-shot victory Sunday over Adam Scott at Torrey Pines. It was his 10th straight year with a victory worldwide, including his gold medal from the 2016 Olympics, and his 10th career PGA Tour victory gave him the most of any player from England, breaking a tie with Nick Faldo.

Rose finished at 21-under 267, the lowest 72-hole score at this event in 20 years, and the warm, windless weather had a role in that.

“Twenty-one under around Torrey Pines is great golf,” Rose said. “But you had to do it. It felt like I had to work hard for his.”

Scott left him little choice. After not making a birdie until the ninth hole – and missing a 20-inch par putt on No. 5 – Scott closed with four straight birdies and kept the outcome in doubt until Rose hit wedge to 3 feet on the 18th hole for his last birdie.

“I just didn’t have the game on the front nine, and it’s a shame because Justin was a little shaky early with some bogeys,” Scott said. “By the time I got it sorted out, it was a bit too late.”

Rose became the first player to post all four rounds in the 60s since Peter Jacobsen in 1995, back when the North and South courses were 700 yards shorter. Weather aside, this was an exquisite performance, especially with his three penalty shots on Saturday, and opening the final round with three bogeys in five holes.

Hideki Matsuyama closed with a 67 and tied for third with Talor Gooch, who shot 68. Gooch, who finished fourth last week in the Desert Classic to get into this event, earned a spot in next week’s Phoenix Open. He is playing this year on conditional status.

Jon Rahm was never a factor after pulling within one shot with that birdie on No. 6, which turned out to be the only one he made all round. He shot 72 and tied for fifth with Rory McIlroy (69) and defending champion Jason Day (67).

Tiger Woods had to settle for his own version of winning. Starting the final round 13 shots behind, Woods wanted to get into double figures. He birdied his last two holes for a 31 on the front nine to shoot 67 and finish at 10-under 278. He tied for 20th in his 2019 debut.

“Got to have these little goals when I’m not in contention to win a tournament,” Woods said. “Still something positive to end the week on.”

The timing was ideal for Rose, who takes pride in winning every year. The last time he won in January was in South Africa in 2002, the first of his 22 victories worldwide. But it goes beyond that.

Rose dedicated the victory to his caddie, Mark Fulcher, who had a heart procedure last week and was watching from home. Rose used Gareth Lord, who previously caddied for Henrik Stenson and knows Rose well from Ryder Cup partnerships.

“Probably harder than the heart surgery itself, watching this weekend,” Rose said. “This one’s for him.”

It also was his first victory since signing new equipment deal with Japanese-based Honma, leading Rose to switch out everything but the golf ball.

Even though Rose never lost the lead, and led by at least two the entire back nine, there were a few key moments.

He got up-and-down from delicate spots to save par on the 13th and 14th hole, and made an 8-foot par putt on No. 15 with Scott in tight for birdie, keeping the lead at three shots. On the par-3 16th, Rose holed a 30-foot birdie putt, right before Scott followed him in for birdie from 20 feet. And then Scott closed the gap to two shots with an approach inside a foot on the 17th, giving him a chance on the 18th.

The Australian missed his tee shot on the par-5 18th into a bunker and had to lay up, and Rose effectively ended it with his wedge to 3 feet. Scott also made birdie, a great finish that barely allowed him to make up any ground. His 269 was the same score Woods had in 2008 when he won at Torrey Pines by eight shots. Only four other scores have been lower since this event moved to Torrey in 1968, all of them before it was beefed up ahead of the U.S. Open.