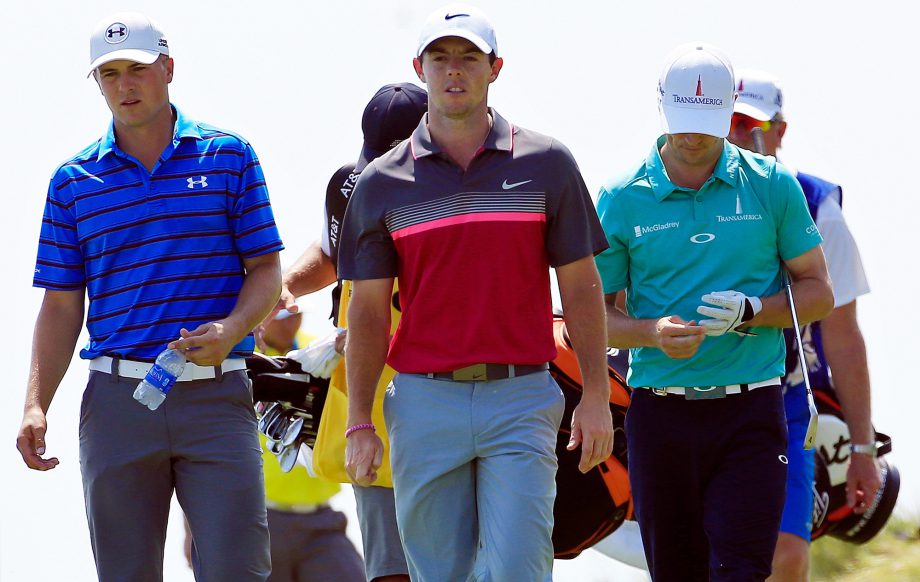 ABU DHABI, United Arab Emirates – The latest stop for Jordan Spieth on his tour of the golfing world is the Middle East and an eagerly anticipated head to head with Rory McIlroy at the Abu Dhabi HSBC Championship this week.

It seems that two of the sport’s biggest names have clashed before the first tee shot has even been struck.

For some pre-tournament publicity, Spieth and McIlroy were among those taking part in a “Rider Cup” challenge that included riding motorized golf scooters – so-called GolfBoards – along a fairway on a local course in the gulf emirate.

“It was quite competitive,” McIlroy said with a smile. “Actually, Jordan nearly took me out. We collided halfway down the fairway – thankfully I didn’t fall off.”

On Thursday, it will be McIlroy trying to knock the top-ranked Spieth out of his stride.

Fresh off an eight-stroke win in Hawaii on his 2016 debut that backed up his sensational 2015, Spieth will make his first appearance in a regular European Tour event when he joins McIlroy and Rickie Fowler in a stellar three-ball for the first two rounds at Abu Dhabi Golf Club.

For No. 3-ranked McIlroy, it will be a first start of the year and a chance to see his biggest rival up close.

“I don’t play the game on (laying down) markers at all,” McIlroy said. “I want to play my best, and I don’t have to just beat Jordan Spieth this week. I have to beat another 142 guys.”

Since McIlroy last played competitively, in winning the World Tour Championship to clinch the European Tour’s Race to Dubai, Spieth has competed in Australia, the Bahamas and Hawaii. What has become a virtual global tour for golf’s new big thing started in October with the President’s Cup in South Korea and continues with his Middle East debut in Abu Dhabi and an appearance at the Singapore Open next week.

“It’s a bit tiring,” said the 22-year-old Spieth. In fact, he looked as bouncy and excitable as ever Wednesday.

While Spieth has been travelling, McIlroy underwent – and has been recovering from – laser eye surgery which he hopes will improve his short game and putting. He emerged from a two-month winter break with week of practice in Dubai last week, and says he is refreshed and refocused.

After four runners-up finishes in Abu Dhabi, including the last two years, McIlroy wants to take the extra step this week to give him momentum at the start of a seven-tournament stretch before the Masters at Augusta National, where he will bid once again to complete the career grand slam of majors.

As well as No. 6 Fowler, the other member of the world’s top six in action is No. 5 Henrik Stenson, who makes his first start since keyhole surgery in right knee on Dec. 9

“It feels fine hitting balls. That’s not an issue really,” the Swedish player said. “Just getting back to walking normal and putting it to the test of walking 18 holes five days in a row is going to be the challenge.”

Martin Kaymer is the other star attraction, with the German seeking his fourth title in Abu Dhabi after victories in 2008, ’10 and ’11. Kaymer held a 10-shot lead with 12 holes to play in the final round round, but his dramatic implosion saw Gary Stal of France snatch the win.

Stal is defending his title.

It is the first leg of the Desert Swing, which also includes the Qatar Masters and the Dubai Desert Classic.