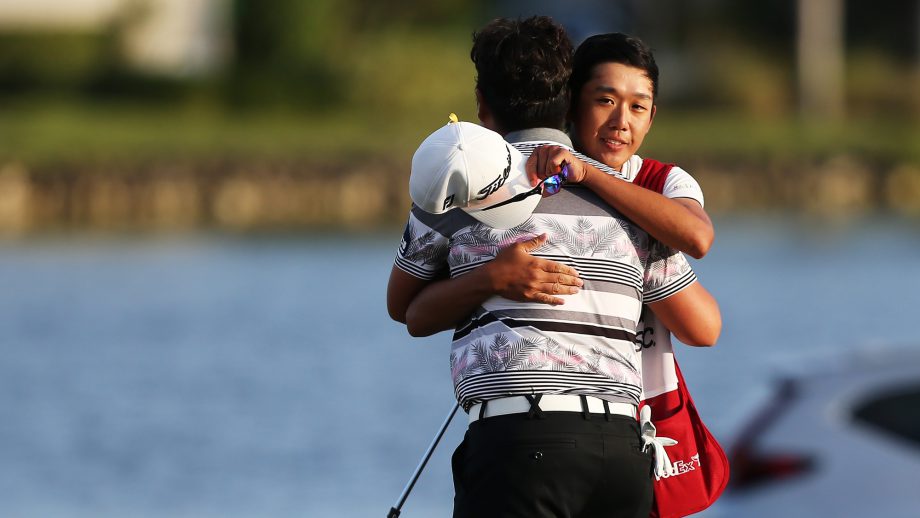 Toronto’s Albin Choi plans to retire as a professional caddy with a perfect record.

Choi has been caddying at Old Palm Golf Club to start the 2020 season as he heals up a wrist injury. He was presented a new challenge when Sungjae Im asked Choi to caddy for him at last week’s Honda Classic he was happy to help out.

Im went on to win his first-ever PGA Tour event and with Choi’s wrist almost healed, he’s quitting caddying while he’s ahead.

“I’m just I’m just super thrilled with the result,” Choi said on Tuesday. “One-for-one record which everyone jokes about, you know? I should probably be retiring on that note as a caddy. Keep that streak.”

Im and Choi had become friends during the Canadian’s five seasons on the Korn Ferry Tour. Im is South Korean and Choi thought it was beneficial for his friend to have a caddy fluent in his native language, even translating for Im in the winner’s news conference.

“I know he’s had some trouble with other caddies with language barriers and such, but having somebody that he could communicate with this week, I think he was happy with that,” Choi said. “I’m glad I could help him out a little bit.

“Whether I’m caddying or whether I’m playing, I just want to do the best job that I can.”

The fourth round saw Im in the final pairing with Mackenzie Hughes of Dundas, Ont., a player that Choi is more than familiar with. Choi and Hughes forged a friendship as juniors, with three consecutive Canadian amateur titles between them, and were then members of Golf Canada’s inaugural young pros squad in 2014.

“I’m pretty sure that’s never happened before,” Hughes said of a PGA Tour event having two Canadian amateur champions in the final group.

Choi won the Canadian amateur title in 2010 before coming second behind Hughes in 2011, before Hughes won again in 2012. Both Hughes and Choi were glad to reconnect and make Canadian golf history.

“It’s always nice to see a familiar face,” said Choi, who pointed out that Hughes’s caddy Jace Walker, from St. Thomas, Ont., is also Canadian. “The whole week was just a great experience and I had a lot of fun with it.”

Choi expects he’ll be 100 per cent within the next month and will start entering Monday qualifiers and other tournaments.

Hughes expects that his longtime friend will be competing in the PGA Tour in no time, even texting Choi on Sunday night to tell him he wants to play with him in a final group soon.

“I know how good of a player he is. He had my number most of the time when we were playing amateur golf and coming up through the ranks,” Hughes said. “He was a very good player and still is. I’m hoping that someday soon he’ll join myself and (Corey Conners) out there.”

Corey Conners of Listowel, Ont., and Nick Taylor of Abbotsford, B.C., are the only Canadians in the field this week at the Arnold Palmer Invitational at Bay Hill Club in Orlando.