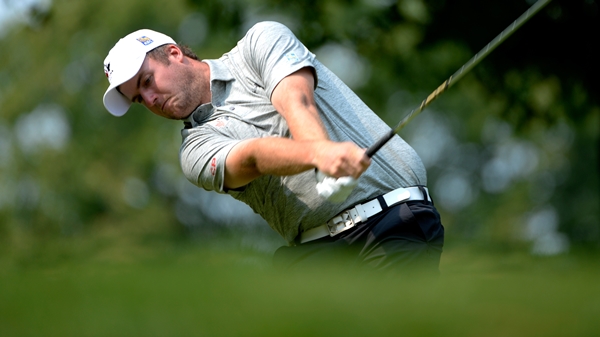 Ultimately, of the five Canadian amateurs competing in the second round, only 23-year-old Taylor Pendrith made the cut.

Despite shooting a 5-over 75 in the second round to erase the stellar 5-under 65 he shot on Thursday, Pendrith squeaked into the next round at even par, 10 strokes behind leaders Jim Furyk and Tim Petrovic.

“It was a disappointing round today,” said Pendrith, who finished one stroke off the lead after the first round of play. “To play well yesterday and come out and not play my best (today) … I didn’t hit many greens and didn’t give myself too many chances for birdies. That’s the main thing. My ball striking was off today.”

Meanwhile, amateur Adam Svensson of Surrey, B.C., narrowly missed the opportunity to golf throughout the weekend.

“I’m a little rattled right now,” said Svensson. “I’m pretty disappointed. I know I can make the cut easily if I play well. My putting wasn’t there this week. It happens. My game can beat a lot of pros, and I can definitely make the cut at the Canadian Open.

“It’s always good experience. But I don’t need experience anymore, I just need to go out there and play my game.”

Corey Conners and Kevin Carrigan finished 5-over after 36 holes, while Chris Hemmerich, after a tough first round on Thursday, finished 8-over 148 overall.

Pendrith, at No. 18 in the World Amateur Golf rankings, is Canada’s top male amateur. A recent graduate from Kent State University in Ohio, Pendrith is a hard-hitting golfer who could make the move from amateur to professional as early as this fall.

“It’s a great experience,” said Pendrith of his first tournament playing versus the pros. “I’m having a great time out here. To get a round of 65 in my first PGA Tour is pretty awesome. The whole atmosphere was amazing. I’m hoping to be back here in a couple of years.”

On the heels of an impressive first-round performance in which he sunk five birdies, Hearn finished the day at even-par thanks, in part, to an eight-foot putt for birdie on the eighth hole.

“If you look at the card, that’s kind of the way I played,” said Hearn, who finished 32nd in last week’s British Open. “I made some good saves when I needed to, and I just never really got the ball quite as close as I did yesterday. But I hit the ball great from tee to green. If I can continue to do that for the rest of the week, I know I’m going to play well.”

Hadwin sunk three birdies on Friday to finish at 1-under 69 on the day, while Fritsch’s birdie on 18 gave him a 2-under 68, good for even par after two rounds.

Weir, the 2003 Masters champion, came close to bettering his score from the green on several occasions. The crowd favourite two-putted for par on the par-4 fourth hole, and again on the par-5 sixth hole, narrowly missed the cup with his first putt both times.

“They call it a game of inches, right?” said Weir, who is playing in his 24th Canadian Open. “There were a lot of things that, if they fall the other way, it could have been a good score. It just didn’t happen today. A lot of really good putts with nice speed on the correct side of the hole looked like they were going to go in, but for whatever reason they just didn’t.

“I had great crowd support out there and I was hoping to just make a few birdies and get some momentum going and get some roars going, but it just didn’t happen today.”

Four-time PGA Tour-winner Stephen Ames of Calgary finished at the bottom of the pack, shooting 10-over 150 for the tournament’s fourth-worst result.

Going into the weekend, Canadian hopes now rest on Graham DeLaet, who moved into third at 8-under after two rounds. DeLaet, ranked 38th in the world, tied the Royal Montreal course record on Friday after sinking nine birdies for 7-under 63. He also became the first Canadian since Weir in 2004 to finish in the top-3 after 36 holes.