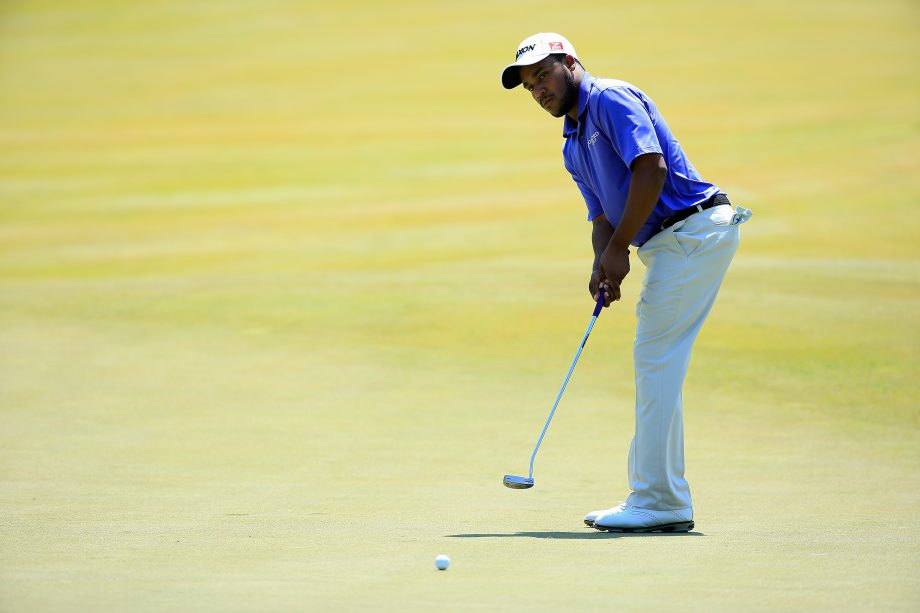 Harold Varner is one of six players tied at 10 under after three rounds. (Michael Cohen/Getty Images)

HALIFAX, N.S. – Texan Bronson Burgoon matched the Ashburn Golf Course record with an 8-under 63 in the third round of the Nova Scotia Open and was within one shot of the lead when he posted his 10-under 203 total. The strange part was that Burgoon teed off nearly four and a half hours before the final pairing that included 36-hole leader Andrew Landry. By the time dust settled many hours later, Burgoon’s name was the first one on the board as a Web.com Tour-record six players suddenly shared the 54-hole lead.

The unpredictability of the game came to the forefront late Saturday afternoon as several players challenged for the lead, some took it outright, several shared it, others took it back and then gave it away at the end.

“I didn’t check the leaderboard until the 10th hole and I was reinvigorated. I was one-over for the day and really felt like I had thrown shots away left and right,” said Jamie Lovemark. “It was good to see. I really couldn’t believe it. I don’t know why exactly and I’m not sure anybody does.”

Lovemark managed only two bogeys and posted a 1-under par 70 that still gave him a share of the lead.

Abraham Ancer birdied seven of his final 14 holes and posted a bogey-free 64 shortly after Burgoon finished, which put him near the top of the board.

Harold Varner III closed bogey-birdie-birdie-bogey and fell into the first-place pit when he three-putted the final hole, a treacherous, uphill par-4 that measures 469 yards. Lovemark followed a few minutes later and added his 6-4 frame to the pile.

Landry held the outright lead after the first two days and surrendered it with a bogey at the first and three in his first eight holes. The 27-year-old Texan rallied with three birdies on the back, including one to close his round on 18 and move into a tie for the lead.

Korea’s D.H. Lee dropped off the pace and then took the outright lead at 11-under par with three consecutive birdies starting at No. 12 but played the final four holes in one-over and became the sixth, and final, entry in the record book.

Following the leader are five more players who are tied for seventh place, just one shot back. Leading that group is 47-year-old Mark Walker, who also owned the outright lead as he played the difficult 18th hole.

Walker, who has no status on Tour this year, couldn’t hold it.

“I got the hard part out of the way – I drove it right down the middle,” said Walker, who lives in the Dallas area. “The main thing for me is to get that ball in play, and I did, perfectly. I couldn’t hit it any better.”

Walker trap-hooked his 3-iron into the trees left of the green and chipped onto the green, 40 feet from the pin.

“I played solid all day,” said Walker, who was mistake-free to that point and finished with a 2-under 69. “That being said, I don’t mind making bogey. I made a bad swing, that’s okay. I compounded my problems by three-putting. That was unacceptable.”

As for Sunday’s mad dash to the finish, Lovemark summed it up best.

“Anybody can win,” he said. “If you get out there early with no wind and perfect greens, you can post a score just like those guys did today. I think everybody’s in it, which is crazy.”