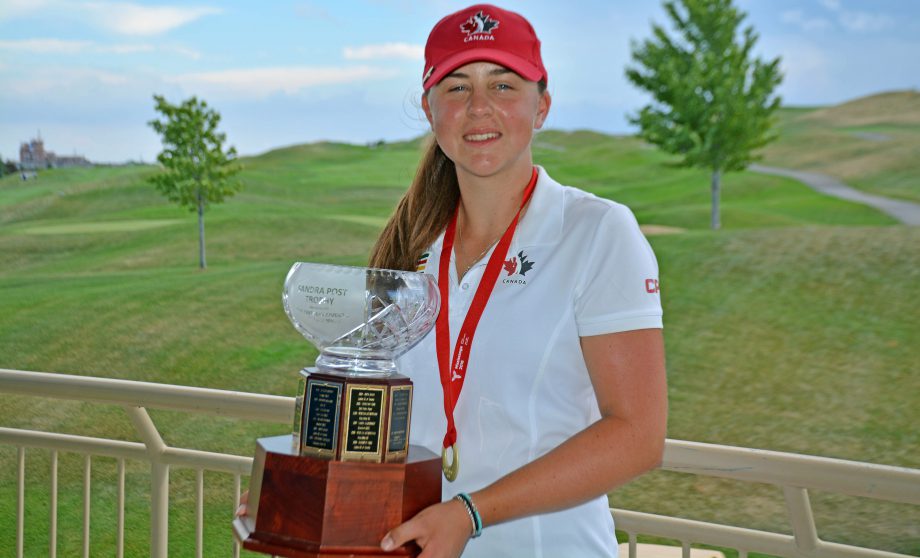 MISSISSAUGA — Golf at the 2016 Mississauga Ontario Summer Games came to a close today with Stoney Creek’s Johnny Travale and Mississauga’s Chloe Currie standing atop the podium.

Travale came in with a lead and never relinquished it, carding a two-over (74) final round. Currie came from behind to win thanks to a four-under (68) on the day.

Travale, from Hamilton Golf & Country Club, entered the day at 10-under for the tournament, with a four-shot lead. The 15-year-old didn’t let his competitors back into it on the front nine as he was even par heading to the turn. On the back nine he would settle for three bogeys, but added a birdie to finish two-over, which was good enough for the win. Travale ended the championship at eight-under (68-66-74-208).

“It feels good to win this. A lot of hard work has gone into my game, especially after having a little upset at the U.S. Junior,” said Travale.

Earning silver was Langton’s Peyton Callens. Callens, from Delhi Golf & Country Club and Team Ontario, began the day five-under and that is where he finished thanks to an even par final round (70-69-72-211).

Rounding out the podium with the bronze was King City’s Michael von Schalburg. The York Downs Golf & Country Club member had a tough front nine but settled down on the back nine to end the day three-over (75). That helped him finish the event at three-under (68-70-75-213).

In the girls’ championship, Currie, from the Mississaugua Golf & Country Club, started the day two shots off the lead. The 16-year-old quickly made up that ground thanks to a solid three-under front nine. She continued her strong play on the back nine finishing it at one-under to end the day four-under (68). That moved her tournament total to seven-under (68-73-68-209), earning her a four-shot win.

Taking the silver was Richmond Hill’s Monet Chun. Chun, from the Summit Golf & Country Club and Team Ontario, was the leader as the final round got underway. However, she would give it up with a two-over front nine. While she did play the back nine even, she was unable to make up the ground on Currie. Chun finished the day two-over (74) to bring her tournament total to three-under (74-65-74-213).

Picking up the bronze was Maple’s Alyssa DiMarcantonio. DiMarcantonio, from Station Creek Golf Club and Team Ontario, started the final round at five-over. However, the 13-year-old had the second best round of the day, next to Currie, finishing at three-under (69). That moved her to two-over (80-69-69-218) and helped her earn the medal.