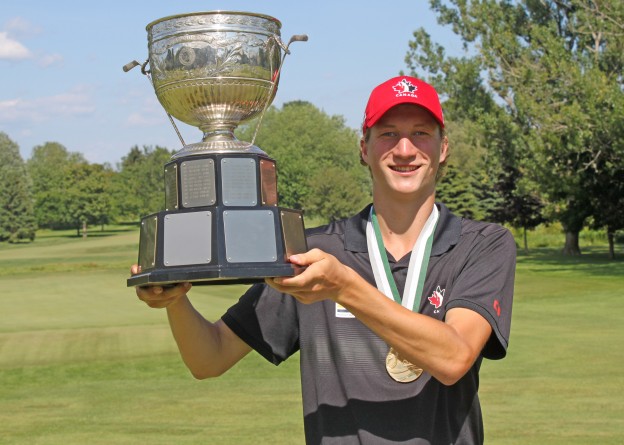 PORT HOPE – The Golf Association of Ontario’s (GAO) Investors Group Junior Boys’ Championship wrapped up on July 24 from the Dalewood Golf Club in Port Hope. The four-round event was dominated from start to finish by Waterloo’s Trevor Ranton who hoisted the trophy at the end of the day with a final round two-under (69).

Ranton, 18 from the Whistle Bear Golf Club, gained his momentum during the first round when he shot six-under (65). He opened up a four-stroke lead that he used to see out the win during the remaining rounds.

On the final day, Ranton, a member of the Golf Canada Development Squad, started strong with a birdie on the second hole. He would give it back but was even through the turn. On the back nine, Ranton, sealed it with an eagle on the 14th, to secure the win. He finished the tournament five-under (65-72-73-69-279).

After the win, Ranton spoke about how his opening round set the tempo for the rest of the tournament. “It really allowed me to play freely, knowing that I had that cushion. When my game wasn’t going as well during the second and third day, I was still in a positive mindset because I knew that I had done that the first day and knew I could do it again.”

Ranton is no stranger to winning big events. Just last year he was crowned the GAO Junior Boys’ Match Play Champion and earlier this year he walked away with the CN Future Links Pacific title. Ranton spoke about where this win ranks for him. “It’s awesome to win this, it has been my goal since I started playing in these events. It is really nice to get it in my final junior year. I’ve been lucky enough to have a couple victories in the last year and a bit and this one is right up their at the top, with it being one of the most prestigious events in Ontario.”

Earning the silver medal was Shelburne’s Kyle Johnston, from the Shelburne Golf & Country Club. Johnston, 18, came into the final round at two-over and went on to post a two-under (69) to earn sole possession of second. He ended the tournament at even par (69-72-74-69-284).

The bronze medal was won by Peterborough’s Sam Meek, from the Kawartha Golf & Country Club. Meek, 16, was consistent throughout the tournament and finished three-over (69-73-72-73-287).