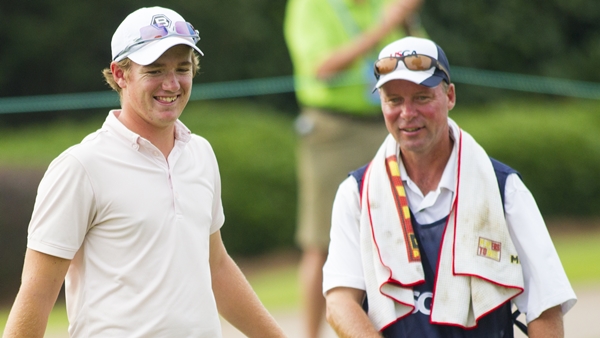 JOHNS CREEK, Ga. – Jimmy Beck, Taylor Moore and British teenager Sam Horsfield shared the lead at 6-under-par after the first round of stroke play qualifying at the U.S. Amateur Championship on Monday.

Beck, from Columbus, Georgia, had a 65 on the Atlanta Athletic Club’s par-71 Highlands Course and Horsfield and Moore each shot 66 on the par-72 Riverside Course.

Lee McCoy of Clarkesville, Georgia, was one shot back after a 67 on Riverside. Tied for fifth at 4-under were Jonathan Garrick of Atherton, California, who shot 67 on Highlands, and Cameron Young of Scarsborough, New York, who had a 68 on Riverside.

The field of 312 players will be cut to 64 after Tuesday’s round. The format then switches to match play on Wednesday, leading up to the championship on Sunday.

Beck, a senior at Kennesaw State University, won the 2013 Georgia Amateur champion and finished second in the Georgia Open two weeks ago. He got off to a fast start Monday with birdies at Nos. 2 and 3 and finished with seven birdies and one bogey.

“I’ve been playing well coming into this and just to see putts fall, continue to fall and just hit it where you want to hit it, it’s a good feeling,” Beck said. “I was just really trying to have fun and end the summer right and what better way to do it than right here in Georgia.”

Moore, a junior at the University of Arkansas, also had seven birdies and one bogey.

“Shooting 66 puts me in a good spot,” Moore said. “I’ve got to stay aggressive, keep hitting greens and not let off the gas.”

Horsfield, 17, is playing in his second U.S. Amateur and has an impressive record in USGA events. He reached the semifinals at this year’s U.S. Junior Amateur and has made match play three times at the U.S. Public Links Championship.

“Hopefully I won’t have to worry about the cut,” Horsfield said after a round with six birdies and no bogeys. “Hopefully I can just go out there and play toward the center of the greens, don’t do anything stupid. I don’t have to fire at pins like I would if I was close to the cut line.”

The outcome was a surprise for McCoy, a junior at the University of Georgia, who was frustrated by his poor performance on the practice tee prior to the first round.

“I had probably the worst warmup session in my life this morning,” McCoy said. “Going to the first tee, I told my dad, `I’m hitting it sideways.’ I was hitting it so bad. I had a good swing thought on the first tee. Something kind of clicked and had a good tee ball and I kind of rolled from there, made a couple long putts I should have made.”

In danger of failing to advance to match play is world No. 1-ranked amateur Ollie Schniederjans of Powder Springs, Georgia. The Georgia Tech senior shot a 2-over 73 on Highlands and is tied for 106th. Second-ranked Robby Shelton of Wilmer, Alabama, is among 10 players tied for seventh at 3 under. Also in the group at 3 under are Corey Conners of Listowel, Ont. and Adam Svensson of Surrey, B.C.