A trip of a lifetime to the Home of Golf 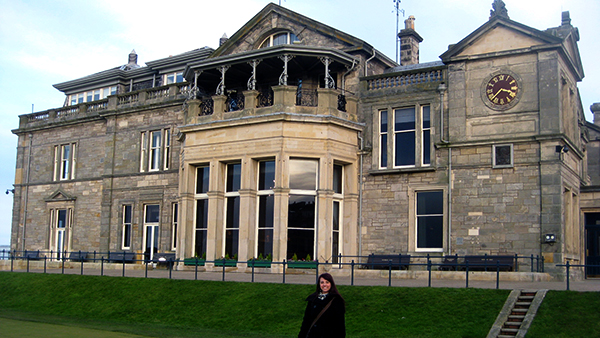 It’s true what they say about St. Andrews, Scotland – it really is the Home of Golf.  The feeling of walking through town, past the clubhouse and over Swilcan Bridge is like none other.  The Home of Golf truly lives up to the hype. I was fortunate enough to experience these things first hand by attending the R&A Tournament Administrators and Referees School (TARS) with our Vice-President, Roland Deveau. We had the chance to represent Golf Canada and to see the mecca of golf in-person.

As the world’s governing bodies of golf, the R&A and the USGA work together to grow the game around the world, maintain its storied traditions and educate people on its rules. Our four-day seminar began on a Tuesday afternoon with the 95 delegates meeting one another.  Despite coming from across the globe, we quickly bonded over our shared passion for this great game and its rules.

The morning of the Level 3 exam brought about an early breakfast and a flurry of last minute reading before the two-and-a-half hour task before us.  The five-part test breezed by in an instant – it really is amazing how fast countless hours of studying and preparation can be applied with pen to paper.

Following the ordeal – which was equal parts horrifying and exhilarating – we were able to turn our attention to the rest of the seminar. The afternoon of the second day focused on how to successfully run a championship.  One thing that every championship needs is a dedicated team of volunteers and it was great to see so many passionate people at this seminar.  It never ceases to amaze me that Golf Canada has such a committed team of rules officials, starters and scorers at its amateur championship events.  Roland Deveau from Nova Scotia is one such dedicated volunteer.

That Wednesday afternoon brought about discussions on amateur status and the world of golf’s current hot topic: pace of play.  Every association is trying to figure out ways to solve this dilemma and it was interesting to hear everyone’s perspectives.  The R&A’s findings on the issue were well received, but the question remains: what more can we do?  Golf Canada’s checkpoint policy has seen some success and I was excited to learn that the Swiss Golf Association uses it in some of their events.  The group then contemplated the game’s exposure and recognition as the sport prepares for its return to the Olympic Games; I contemplated how Canada would defend its Olympic title.

Thursday was all about the rules of golf with European Tour Chief Referee Andy McPhee discussing “The art of refereeing.”  Andrew Coltart, a former player on the European Tour, was on-hand to provide us a view from the other side – the golfer’s perspective. Sharing and discussing are great; role-playing is even better.  Each delegate was given three different rulings as we assumed the role of rules officials while the R&A staff acted as players.  The rulings spanned putting greens to hazards; through the green to temporary immovable obstructions (TIOs).  Despite being indoors, the staff did an excellent job of making it very realistic with an actual bunker with stacked turf and even a TV tower.  It was a nerve-wracking experience having to get up and do a ruling in front of some of the world’s most knowledgeable golfing minds, but each correct ruling was a great confidence builder.

The final day of the seminar focused on the difficult task of delivering rulings on equipment questions.  We were given a number of different clubs and scenarios and worked together in groups to decide on the ruling.  We saw a presentation on course marking and how to develop local rules of the competition.  The day was highlighted by group video discussions of incidents that have occurred on the PGA, European Tour, and the LPGA Tour. The seminar came to a close that evening in the perfect way: everyone coming together for dinner at the historic R&A clubhouse.

The club’s history was not only educational, but also exciting as the R&A continues to write a new chapter in its legacy. For the first time in the Royal and Ancient Golf Club’s 260-year history, women will be able to become members of the club.  Further cementing our ties to the R&A, Diane Dunlop-Hébert, a past president of Golf Canada and Golf Québec, became one of the club’s first female members.

This opportunity was truly an unforgettable once-in-a-lifetime experience. I will always remember gathering with delegates from other countries to have dinner in the clubhouse library with Grant Moir, the Director of Rules for the R&A.  I am still in awe of my tour of Peter Dawson’s office. Having attended this seminar will enhance my ability to act as Tournament Director and I could not be more grateful for having had this wonderful opportunity.

You can begin your Rules of Golf Education anytime, beginning with our online curriculum; to start your Rules Education, click here.

Justine Decock is the Coordinator, Rules and Competitions for Golf Canada.