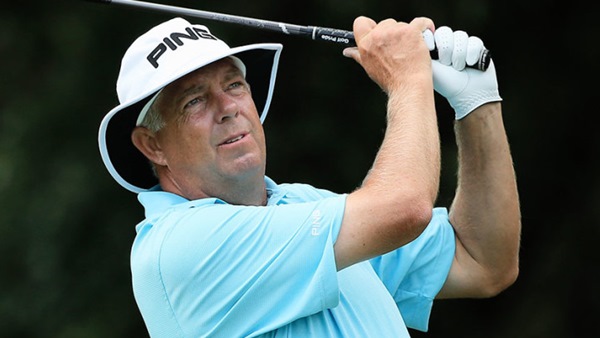 CARY, N.C. – Kirk Triplett won the SAS Championship on Sunday for his second victory of the year and fourth in three seasons on the Champions Tour.

The 52-year-old Triplett closed with a 3-under 69 for a three-stroke victory over Tom Lehman. Triplett finished at 14-under 202 at Prestonwood Country Club.

Triplett followed each of his three bogeys with birdies.

“I had a few bogeys, and I had some bounce-backs,” Triplett said. “That was the key to today.”

“I was playing with Paul (Goydos) and Tom, and neither one of them were really – they were getting some chances, but they weren’t converting, and I just felt like I had that nice cushion,” Triplett said. “After that, a tough old guy, Tommy Lehman, made an eagle, birdied 16, eagled 17. I’m like, `Come on, man.'”

But Triplett converted his sixth birdie of the day on the 17th to maintain a three-shot lead.

“I hit a lot of fairways, a lot of greens,” Langer said. “When I did miss a green I got it up and down, so that’s a great performance. Just usually, I make more birdies when I play that well. But as I said, the putter wasn’t quite cooperating, especially not today.”

Langer extended his lead in the season-long race Charles Schwab Cup race, adding 138 points this week. He has a tour-high five wins – two of them majors – and leads the money list. Colin Montgomerie finished outside the top 10, earning no points this week.

“We’ve still got three more tournaments,” said Langer, who now holds a 771-point lead over Montgomerie. “I’m not playing next week, Colin is, so he’s got a great opportunity to make up ground. But I did everything I could, I think, this week to stay in front of him.”

Goydos, Mark McNulty and Kevin Sutherland tied for fifth at 9 under. McNulty had a 67, Sutherland shot 70, and Goydos 72.

Jim Rutledge carded a final round 2-under 70 to tie for 50th as the leading Canadian at even-par 216.