Mullally leads national women’s team to successes at many levels 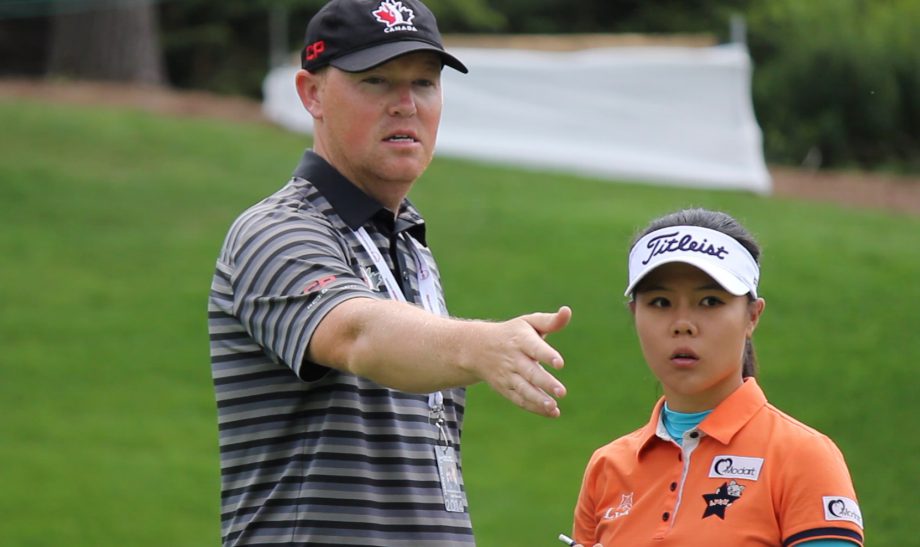 With a schedule that will see him on the road for 180 days this year, there is little time to look in the rear view mirror for Tristan Mullally, Ontario and Canadian Coach of the Year for 2015, unless he’s sitting on an airplane.

One look at the travel itinerary for the Head Coach of Golf Canada’s Women’s National Amateur and Development Teams over the next couple of months will leave you breathless – and that’s just the lead-up to the four majors in five weeks in August and September that Mullally is preparing his girls for, as well as members of the Young Pro Program that he oversees.

This past weekend, Mullally made the trip to Ohio State University to see Canadians in action at the Lady Buckeye Spring Invitational where Team Canada Amateur squad member Josée Doyon finished T2. From there he will make stops in the coming weeks at the LPGA Tour stops at Volunteers of America Texas Shootout and the Marathon Classic in Ohio, a couple of Symetra Tour events in Albany NY and Michigan, NCAA Regionals and NCAA National Finals, the CN Future Links Pacific Championship in Kamloops, a National Team training camp in Toronto, the Women’s Western National Amateur Championship, the Porter Cup, the Women’s North & South Amateur Championship, several provincial championships, the Canadian Junior Girls’ and Women’s Amateur championships, the US Women’s Amateur and that is just a warm up to the most important stretch of golf for this year.

Canada’s top professional and amateur female golfers will be on the world stage at the Olympic Games in Rio from August 15th to 21st, the Canadian Pacific Women’s Open from August 22nd to 28th in Calgary, AB, the Manulife LPGA Classic from August 31st to September 4th in Cambridge, ON, the World Amateur Team Championships from September 14th to 17th in Mexico and Mullally will be with them every step of the way.

“We have four majors in five weeks. It’s going to be a busy run. It’s make or break. I want these players to have success. They work very hard to try to have success and I want to help them achieve it. I think we have had lots of success from players across the board this year. The last four, five years, Brooke Henderson has stolen the limelight, but if you were to really dig down and look deeper you’ll also see some strong players just below her who I think will start to shine over the next couple of years,” says Mullally who was named 2015 PGA of Ontario and PGA of Canada Coach of the Year earlier this year.

Mullally initially turned heads when he moved his family from Ireland to Oakville, ON, in 2011 to take over as the women’s national coach, but since then the girls he has been coaching have been turning heads. “During my first year, one of my many program targets was to place one player in the top-100 of the world rankings, based on the team’s previous best performance, and last year every player in the program was within the top-100 with six inside the top-50,” Mullally says, noting that players he has coached have won on every female professional tour in North America in 2015 including; the Cactus Tour, the Suncoast Tour, the Canadian Women’s Tour, the Symetra Tour, and the LPGA Tour.

“This is a transition year for the national team and I’m looking forward to seeing the next wave start to come through the system,” says Mullally, who grew up playing Gaelic football, hurling and golf in Ireland. The average player age is 18, but with girls developing at an earlier age than boys, Mullally keeps a close eye on those who are 15-years-old, or a year on either side of that. “When players come to our program a lot of time the bigger weaknesses are about how to actually play, they are not about how to hit shots. It’s actually getting out there and bringing a level of play to competition that we focus on. Success as a professional is not getting your card, it’s actually making money and having a good life on tour, not just playing a year or two, but making a career of it.”

When it comes to the overall approach to coaching, Mullally’s objective is to create pathways to success for as many players as possible. To do this, the 36-year-old, has created a team dynamic for his players to develop not only as individuals, but as a group of players who learn to support each other and may become friends. He has improved and increased consistency for player contact and personal coaching, introduced yoga and meditation to daily practice rituals, included the use of phone Apps to challenge the mental game, added pressure situations to training, streamlined the player support program, increased the use and analysis of stats and much more.

“I now visit players at their home, at their schools and at provincial tournaments rather than just Team Canada events, because it’s important to see them in a variety of settings. It makes for a busy schedule, but it also allows us to have a better picture of the athlete so we can help them get to the next level,” says Mullally, who enjoys spending time with his wife Yelena and their five-month old son when he’s not on the road.