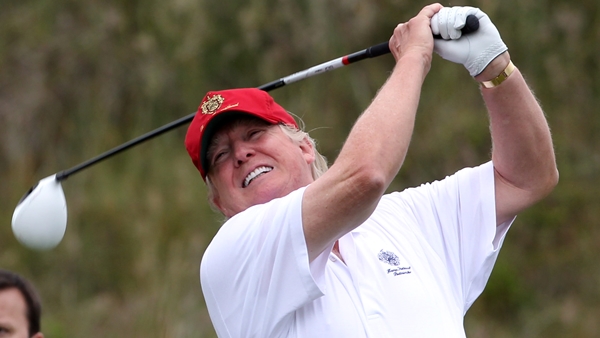 NEW YORK – The PGA Championship is going to Trump National in New Jersey, giving The Donald his biggest tournament yet.

“Certainly when you have courses, when you get acknowledged to have one of the majors … having the PGA is a very, very big deal,” Donald Trump said at a news conference. “So it’s very important to me. It’s a great honor for me and it’s a tremendous honor for both of those clubs.”

Trump said the Old Course at Bedminster has turned down plenty of other offers to stage events with hopes of landing the PGA Championship.

“The PGA of America is excited to begin a new chapter of major championship history by taking two of our premier championship to venues that bear the Trump label of excellence,” PGA president Ted Bishop said.

Donald Trump has 17 golf courses around the world, which includes his agreement this week to buy Turnberry on the western coast of Scotland. Turnberry already has hosted the British Open four times, and R&A chief executive Peter Dawson said it remains on the rotation.

The American developer is slowly becoming a major force in golf.

Trump National Doral near Miami hosts a World Golf Championship the same week in March that his Trump course in Puerto Rico hosts a regular PGA Tour event. The PGA Championship in `22 would be his first men’s major, unless the British Open returns to Turnberry before then.

He formerly had the LPGA’s season-ending tournament at his Trump International course in West Palm Beach, Florida.

Trump National in Bedminster is to host the U.S. Women’s Open in 2017. It was designed by Tom Fazio at 7,560 yards and has plenty of room for enormous crowds. The Virginia course previously hosted the 2013 Junior PGA Championship.

“It’s a phenomenal property, a championship caliber course and an unbelievable amount of room for the operational requirements of a major championship,” Bevacqua said. “And then, quite frankly, the added bonus is it’s in a major market. To be able to bring a major championship to the major metropolitan New York area, with the infrastructure, the hotels, obviously the excitement that generates in terms of spectators, and when you start to line up those pieces, it becomes an easy decision.”

The announcement means the PGA of America will be busy in the greater New York area for the next decade.