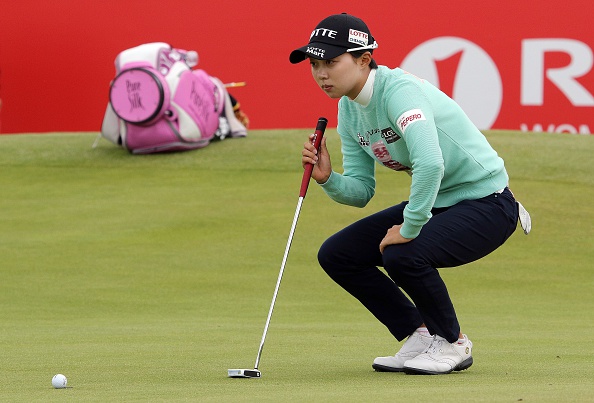 Kim was midway through compiling a 7-under 65 in the first round when Trump, the American presidential candidate, landed in a private helicopter to begin a two-day visit at the tournament at his Turnberry resort in western Scotland.

The on-course action was initially a sideshow for Trump, who seized the attention by inviting the media to his hotel near the course to continue his presidential campaign. The Republican celebrity billionaire eventually watched some golf, although the leaderboard was virtually locked in by then.

The fourth-ranked Kim, who shot a first-round 61 in winning the Evian Championship on her major championship debut last year, was leading by one stroke from Lydia Ko of New Zealand and Cristie Kerr of the United States.

Ko, whose 66 was her lowest score in a major, is looking to become the youngest winner of a major. She’ll be 18 years, three months, nine days on Sunday, seven months younger than Morgan Pressel when the American won the Kraft Nabisco Championship in 2007.

Top-ranked Inbee Park began her quest to complete a sweep of the majors by shooting 69 in what she described as “perfect conditions for golf,” with three of her five birdies coming in her last five holes.

Defending champion Mo Martin shot 70, and Michelle Wie, wearing a brace on her left ankle because of a bone spur, had a 76.

Trump’s grand arrival at 10:30 a.m. certainly didn’t go unnoticed by the early starters on the Ailsa Course. Ko, who went out in the second group after waking up at 3:30 a.m., was on the 16th hole when the real-estate mogul’s helicopter twice circled the Ayrshire links.

The world No. 2 already was 6 under par by then, with a run of four straight birdies from No. 2 giving her momentum. On No. 5, she gripped a 5-wood from 179 yards to inside 2 feet.

Ko is trying not to think about the history she could create this weekend.

Ko held the clubhouse lead for barely an hour before being overtaken by Kim, who rolled in five birdies and an eagle putt from 10 inches at the par-5 14th in her first round in a British Open.

This is only her fifth major championship – and she already has a victory as well as ninth and 11th-place finishes.

“I kept playing good today,” said Kim, who donned earmuffs to combat the early morning chill. She was one of three players in the field to be bogey-free in her first round.

Canada is represented in the field this week by Alena Sharp with an opening-round of even-par and Brooke Henderson with a score of 1-over 73.

The Trump circus is scheduled to leave Turnberry on Friday, allowing the players to take center stage at the fourth major of the year.