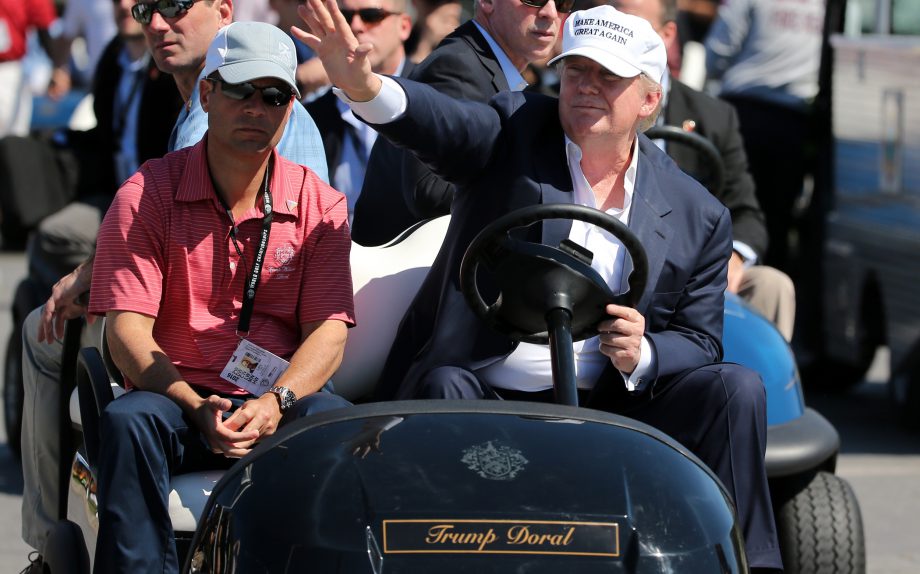 DORAL, Fla. – Donald Trump’s helicopter landed on the course bearing his name, and before long, the Republican presidential front-runner was busy autographing a woman’s shirt, driving a golf cart through throngs of screaming fans and boasting about how he hosts one of the elite golf tournaments in the world.

Trump’s arrival at the Cadillac Championship was splashy, as has been the case plenty of times before at golf tournaments he hosts. What remains unclear is if there will be a tournament for him to even visit at his Doral venue next year, whether he’s living in the White House at that time or not.

“It would be a bad thing for golf,” Trump said when asked about the possibility of the event leaving Doral.

It might happen anyway. Sunday marked the final day that the Cadillac Championship at Trump National will be played under its existing sponsorship agreement, and neither Trump nor the PGA Tour can say with any degree of certainty that a World Golf Championships event – or even a regular tour stop – will be back in 2017.

General Motors’ contract to present the event was ending Sunday, and Tour Commissioner Tim Finchem made clear that sponsorship for Doral going forward is a major question.

“We have moved out of markets before, but not very often,” Finchem said. “And usually, we look at the situation as to how can we improve it. We’re not looking to leave. … Having said that, we have to have sponsorship to conduct a tournament.”

Finchem and Trump were meeting Sunday to discuss how this year’s event went, and to talk about future options. No final decisions were expected, and probably won’t come for some time. Trump said he has business relationships with Cadillac, and reminded reporters that he has a contract with the tour to host at Doral for several more years.

“Everybody wants to be at Doral and the Blue Monster and I’m sure they’re talking to other people now about sponsorship,” Trump said. “But Cadillac has been terrific.”

Trump’s relationship with golf has seemed tenuous at times since the businessman became a politician. His comments last year about Mexican immigrants led to the PGA of America canceling its Grand Slam of Golf at Trump’s course in Los Angeles. And it’s fair to question if new potential sponsors would want to commit to an event at Trump’s course without knowing how his campaign will play out.

“The presidential campaign has a few months left, and I suspect that whatever happens, this won’t be front and center what we’re talking about next year,” Finchem said. “But that’s just the nature of politics in the United States.”

The last groups were about a half-hour from teeing off when the helicopter bearing his name touched down behind some palm trees, and Trump quickly commandeered a golf cart to make his way through some fans and to the driving range – all the while wearing a white cap emblazoned with his “Make America Great Again” slogan.

Those “Quiet please” signs marshals use on the course were no match for the Trumpmania going on behind the grandstands.

“Donald was making a racket there on 18,” Justin Rose said, noting the noise he was hearing on the course as he was trying to finish his round.

Trump was asked if he would self-sponsor a tournament at Doral, and said he hasn’t considered such a move.

“I know they’re talking to other people,” Trump said. “It’s the most important tournament down here. It’s got the best venue in the country and it’s 50 years of great tournaments.”

He said the last time he played was about two weeks ago at his course in West Palm Beach, Florida, with LPGA player Lexi Thompson for nine holes. She shot 32, he said. Trump declined to offer his score, but said a Trump presidency would be good for the game.

“I love golf. I love playing it. It’s a very important game,” Trump said. “It’s a great game. You can learn so much. You make so many great friends by playing it. But I will say this: It won’t be good for my game, but it’ll be great for golf.”