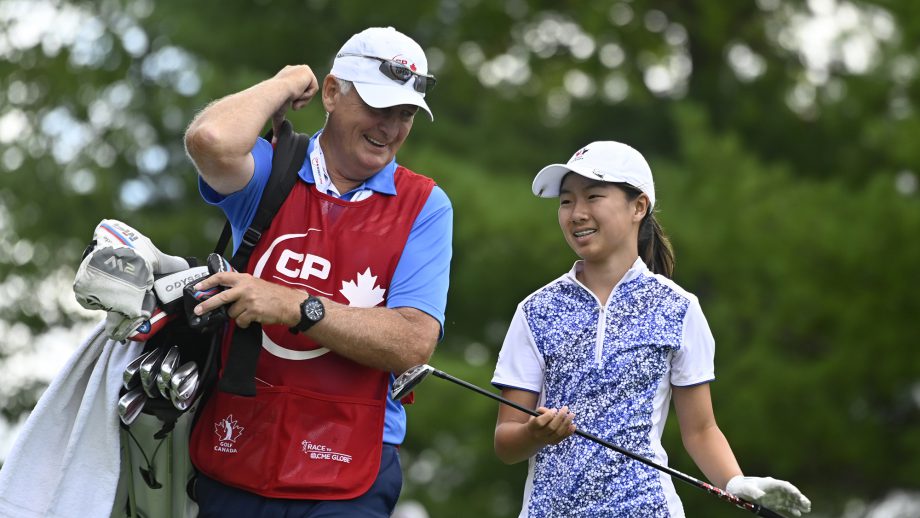 This week at Magna Golf Club it was the 12-year-old Liu who was thrilling fans with her signature.

After carding a 10-over-par 82 on Friday, Liu spent 15 minutes signing mementoes and taking pictures with spectators after becoming the youngest golfer to play in the national Open championship.

“It’s so surreal to see her playing with the same people who once signed her hat,” said older sister Lucy Liu.

After taking up golf at age six, Michelle Liu quickly discovered a passion for the game.

She was also a quick study. Working with coach Rob Houlding, Liu developed a well-rounded skillset and results soon followed.

The Vancouver youngster has become a regular winner of events in her age category and can hold her own with junior players late in their teenage years.

When Liu finished as the top Canadian at the recent national women’s amateur championship, she booked her ticket for this year’s CP Women’s Open.

Expectations were naturally modest and her 19-over-par 163 total was well off the weekend cutline. But the scoreline wasn’t really important.

Liu got to experience everything that comes with participating in a tournament featuring most of the sport’s top players.

Hearing her name called out on the first tee at an LPGA Tour stop. Her first news conference, first birdie at a pro event, and first walk up the 18th fairway in front of an adoring crowd.

There was even a little facetime on the Golf Channel on Friday morning. Not bad for someone who has yet to start the eighth grade.

“I definitely feel pretty good,” Liu said. “It definitely makes me feel proud about myself. Even if I’m not playing at the best of my ability, I still feel like I played a pretty good round and I’m pretty happy.”

As play continued Friday afternoon, only a few of the 15 Canadians in the field were expected to qualify for weekend play.

Brooke Henderson of Smiths Falls, Ont., shot 3-under 69 Friday and was near the top of the leaderboard at 9 under. Anne-Catherine Tanguay of Quebec City was also in good shape at 4-under 140 after a 74.

Alena Sharp of Hamilton and Megan Osland of Kelowna, B.C., were hovering near the projected cut of even par late in their respective rounds.

The emotional swings ran the gamut for Liu over her 36 holes.

Some tears were shed after she opened with an 81. But her bright smile returned early Friday after she hit it long and straight to kick off her second round.

Before hitting, Liu squats down near the blocks and uses both hands to set the ball on the tee.

She then coils her slight five-foot, 95-pound frame and unloads. Her impressive ball-striking form drew ooh’s and ahh’s from the few dozen supporters who followed her around the course.

Liu birdied the par-3 13th hole and had six bogeys and two double-bogeys on her first trip around the 6,709-yard track. She started bogey/double-bogey Friday before settling in for a round that included nine pars and six more bogeys.

Playing partners Austin Ernst and Jennifer Kupcho were able to reach par-5s in two. Liu, who normally plays courses about 1,000 yards shorter, couldn’t match their length and instead tried to set up for birdie putts rather than eagle attempts.

Her short game was steady and composure was remarkable for a pre-teen player competing on this stage for the first time.

“She’s very focused, very level-headed,” said Lucy, who’s entering her junior season at Yale University. “She’s not a player who’s easily intimidated either by the field or by the course itself. I feel like that has always been very crucial to her success.”

Houlding was on the bag for Liu this week and said the takeaways were numerous.

“I think it’ll take a few days to digest,” he said. “The biggest thing is that she’s seeing how some of the best players play. She can gauge her performance against theirs and get some reference on what she’s working towards.”

Lucy Liu, who’s seven years older than her sister, remembered her younger days when Michelle would follow her around the course.

Her sister’s work ethic and drive were noticeable from the start.

“It was very, very self-driven,” Lucy said. “She’s a hard-working, persevering 12-year-old. It wasn’t so much I had to encourage her to go to practice. She was there earlier than I was and staying later than I was. So honestly, I’ve been inspired by her.”

The differences of competing at an LPGA Tour stop are significant for non-regulars but can also be subtle. Amateurs can sometimes feel the gentle pressure of keeping pace with pros in their group who are competing for paycheques.

Liu was attentive to her surroundings and seemed to enjoy herself. She didn’t seem out of place at all.

“I love being able to play in a tournament like this because I feel like there is so much support … I just really enjoyed it,” she said.

Like Michelle, Lucy also attended the 2015 tournament at the Vancouver Golf Club in Coquitlam, B.C. She served as a volunteer, helping to operate the large scoreboard on the 18th hole.

In high school at the time, Lucy said Michelle helped motivate her to keep working on her game.

“So I’m really grateful to her for that.”

Michelle’s mother, father and grandmother were also on hand to watch the second round. It was an experience the family won’t soon forget.

“I think it’s really shown her that professional golf is possible,” Lucy said. “It’s something that she can actually pursue if she’s passionate enough about it.”