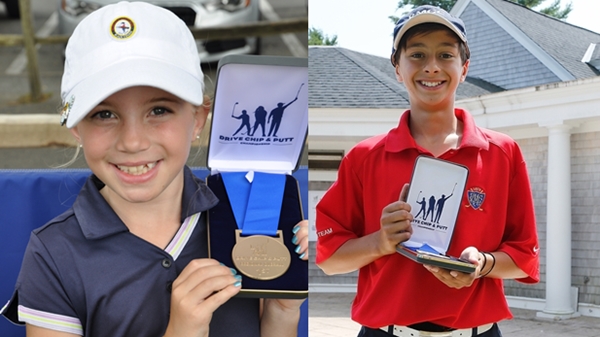 Every golfer dreams of walking Augusta National’s fairways and on April 6th it will become a reality for two young Canadians.

For Remi Chartier and Nyah Kelly it doesn’t get much better – they not only get to go to the Masters, but they will be competing on its historic grounds.

Remi, 13, of Beaconsfield, Que., and Nyah, 9, of Bobcaygeon, Ont., are the only two Canadians who qualified for the inaugural Drive, Chip & Putt Championship alongside 86 other participants.

“When I found out I qualified, I just wanted to hug my dad,” Remi said. “We watch golf together every week but the Masters is by far my favourite tournament and I’ve always wanted to go.”

Golf is a family activity for both players and each Masters bound group is busting with excitement. Remi spends a lot of time golfing with his father, Scott Chartier, at The Royal Montreal Golf Club, while Nyah picked up the game from her mother, Shana Kelly, who is a PGA of Canada professional at Kelly Glen Golf and Learning Centre.

“We’ve never been to Masters, it’s always been on our bucket list,” Nyah’s mother exclaimed. “Golf is a family sport, everyone plays. I hear from people when I’m not around that Nyah gives better lessons than I do, I think she’s picked up the most by watching and listening to me teach.”

The youngsters both qualified by winning their regional qualifying divisions at Drive, Chip & Putt sites in the U.S. Remi won the boys 12-13 division with a score of 132 at the New England qualifier, while Nyah notched 92 points for her victory at the historic Bethpage Black Course.

“I’m so excited about getting to the Masters with my family,” said Nyah who’s been preparing by hitting shots indoors when she gets a break from figure skating. “I think I will be nervous when I get there, but I’m just going to try to keep myself calm before and have fun.”

Nerves certainly aren’t uncommon at Augusta, but both competitors said they feel like they are prepared for the challenge. Prior to Nyah qualifying, her family had converted her grandfather’s warehouse into an indoor facility where she works on her game in the winter. Remi keeps his game sharp by practicing with his school’s sport étude program at Collège de Montréal.

“I have a bit of confidence, the greens I practice on during the winter I think are faster than Augusta because they are made out of wood with carpet,” said Remi who posted the best score in putting at qualifying earning 60 points. “When I get there the greens might feel a little slow but it’s the Masters so obviously they will be fast.”

For both families this opportunity is proving to be about much more than just the competition. They are taking advantage of the golf trip of a lifetime by bringing along siblings and grandparents for the experience.

“Going down to the Masters, we’re looking at it as we’re going down to collect a prize because we’ve already won,” Remi’s father said. “That’s the victory getting down to step foot on Augusta and actually getting to hit some balls at the club.”

The championship final of Drive, Chip & Putt takes place on Sunday, April 6 and will feature 88 junior competitors from across North America. Remi and Nyah will compete against 10 other finalists in their divisions and will get two drives on a 30-yard wide fairway with the longest drive in their division receiving 11 points. In the chipping category, they will take two shots with the closest receiving 11 points. At the putting station, they will attempt 6ft, 15ft and 30ft putts with the closest cumulative distance from the three holes combined to crown the winner.

A perfect score at Drive, Chip and Putt would be 33 points and both players believe they have the game to do it.

Asked if either hoped to meet any PGA Tour players during their Masters experience, Nyah was quick to exclaim she loves 2012 Masters Champion, Bubba Watson, while Remi chose last year’s winner.

“I like so many golfers but if I had to pick one it would be Adam Scott because I’ve always liked him,” he said.

The journey to Augusta will start early for the groups, as they both plan to arrive on site prior to the event to enjoy the atmosphere.

“I’ve driven by the gates imaging what it would be like to go inside,” Remi’s father said. “So the real trophy for this whole thing is getting there.”

Thanks to Remi and Nyah both families will get to see what Magnolia Lane is all about.

For more information on Drive, Chip and Putt, click here.