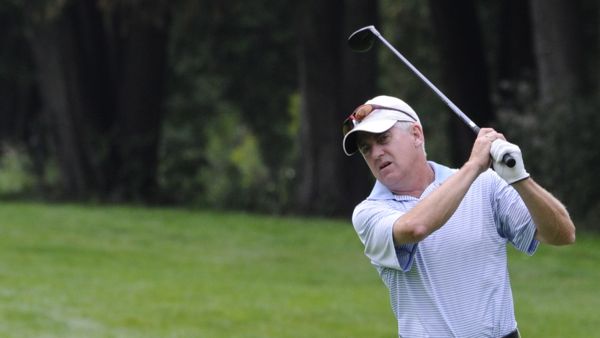 David Schultz and Jay Blumenfeld share the lead heading into the final round of the Canadian Men’s Senior Championship at The Briars Golf Club.

Overnight leader Chip Lutz opened the door for the new leaders after posting a 4-over 75 on Thursday that included a double and a triple-bogey. Playing alongside Lutz, Schultz capitalized by rolling in three-straight birdies on No. 7, 8 and 9 to reach 7-under for the championship but carded three straight bogeys on his closing nine to card a 1-over 72 and finish at 4-under 209.

Playing in the group behind the leaders, Blumenfeld of Parsippany, N.J., fired a 2-under 69 and said he kept control of his game but was surprised to see Lutz stumble on day three.

“Just kept it in control and in play, I didn’t do anything great or terrible,” Blumenfeld said. “I took advantage of a couple of good shots and made a couple of nice putts.”

“I’m shocked that Chip is only at 2-under, he’s a good buddy of mine and a great player,” he continued.

Calgary native, Howard Broun, sits in third at 3-under 210 after an even-par 71 on Thursday.  He will play in the final group alongside fellow Calgarian Schultz, who stated they’ve played many different tournaments together over the past 30 years.

“It’s nice to play with someone from where you’re from,” Broun said. “Today I was a bit shaky to start with a bogey but then made eight pars in a row and a couple of birdies coming in but bogeyed the last but I’m happy with it.”

Neither Schultz or Broun currently have an exemption into USGA’s Senior Amateur Championship at Wade Hampton Golf Club in Cashiers, N.C., September 21-26 and both golfers said they are very keen to earn the winner’s exemption into the prestigious event.

As the two-time defending champion Lutz, heads into the final round two strokes back of the leaders in solo fourth at 2-under for the championship alongside Duke Delcher of Bluffton, S.C., who carded a third round even-par 71.