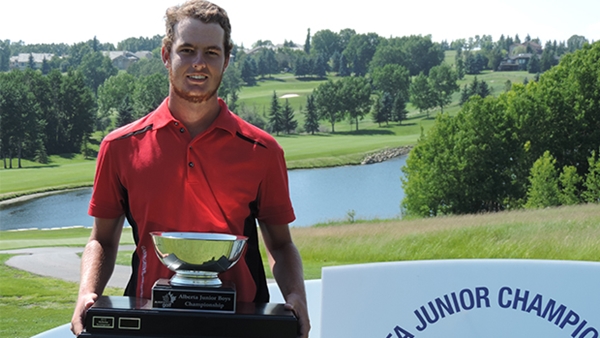 Last year’s runner-up is now a champion. Tyler Saunders capped off a consistent tournament,turning a 1-stroke deficit into a 2-stoke victory and earning his first ever Alberta Junior Boys Championship Friday at Bearspaw Golf Club in Calgary.

“I played solid golf, and putted really well,” said the newly crowned champion. “You can really be comfortable out there when you’re making putts and not hitting any real bad shots.”

Despite an early bogey on the 2nd hole, Saunders did not falter the rest of the round, as he birdied both 6 and 8 building a 4-stroke lead heading to the 18th hole.

“The course was perfect and the greens were running nice and quick,” he added. “It was fair and helped me play consistently.”

Saunders, joined by Andrew Harrison of Camrose, Alta., and Jack Wood of Banff, Alta. will form the Alberta Junior Boys Interprovincial Team that will compete in the Canadian Junior Boys Championship in Niagara Falls, Ont., July 29 to August 1.

Harrison began the day in the lead, but struggled throughout his round, until birdies on Nos. 16 and 18 put some pressure on Saunders.

Calgary’s Scott Walker, 16, won the Juvenile Championship by 6-strokes after shooting a final round 75.