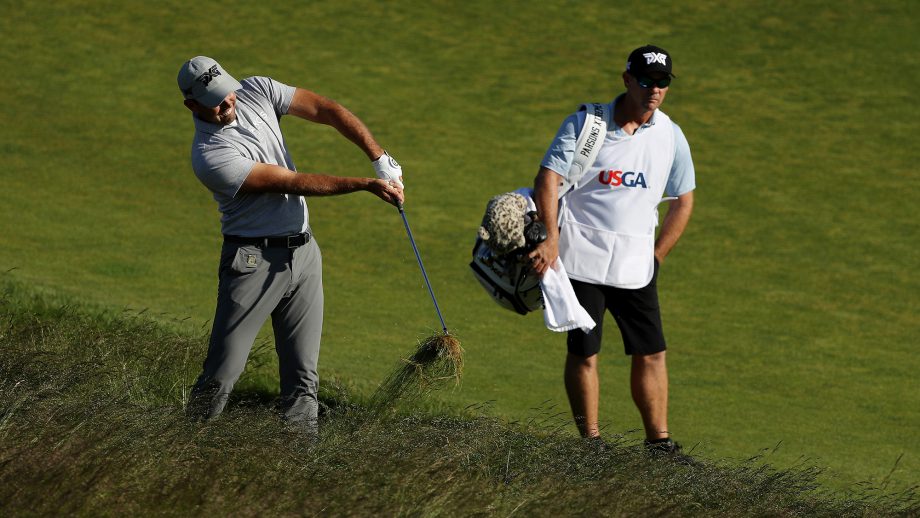 SOUTHAMPTON, N.Y. — The U.S. Open wants to be the ultimate test in golf, and sometimes that leads to a series of trick questions.

One of them was 14 years ago at Shinnecock Hills.

A year after Jim Furyk tied the U.S. Open scoring record at Olympia Fields, the 2004 U.S. Open was so bone dry and lightning fast that only three players broke par on the weekend, none on Sunday. Fans having to move to the side because of a golf ball rolling toward them is not unusual, except when the player hit the shot with his putter from the green. Tee shots that landed on the seventh green rolled off the putting surface and into a bunker.

One year after Rory McIlroy broke the U.S. Open scoring record at Congressional, no one broke par at Olympic Club in 2012 when Webb Simpson won.

Moments like this lead to criticism that the USGA overreacts. Justin Rose sees it another way.

“When everything is in balance, it’s kind of boring,” he said. “And I think in life, the closer you get to the edges, that’s where the excitement is. So I would say the USGA is not reactionary. It’s counterbalancing. So if you go too far one way, you’ve got to come back the other way. You don’t want to fall off the edge.”

That’s the question going into the 118th U.S. Open that starts Thursday.

Might the USGA lean toward going easy on players because of what happened the last time at Shinnecock Hills? Or will it make it tougher on them because of the record scoring last year at Erin Hills? Brooks Koepka tied the record to par at 16 under, and six other players finished at 10 under or lower.

“We’re confident this should be a marvelous test,” said Mike Davis, the chief executive of the USGA who has been in charge of setting up the courses for the U.S. Open since 2006 at Winged Foot, when the winning score was 5 over.

Davis believes Shinnecock Hills is right where the USGA wants it, even with a light, steady rain on the final day of practice.

Wednesday is never the measure of how a golf course presents itself.

McIlroy is among those who likes what he sees. It’s not a U.S. Open if players are not complaining, but it’s been a quiet three days ahead of competition. The biggest question is whether the fairways are narrow enough.

They are tighter than last year at Erin Hills, for sure, and an average of 15 yards wider than in 2004.

“Honestly, I think they’ve got it right,” McIlroy said. “It presents guys with options off the tee. You have to make a decision basically on every tee box what you’re going to do. I’m obviously not that old, but when I watched U.S. Opens on TV and saw these long, narrow corridors of fairways and thick rough, that’s what I was used to at a U.S. Open. … If you look at the venues that are coming up, they’re very traditional venues like Oakmont, Winged Foot, Pebble Beach.

“Maybe you’ll see more of what we perceive as a traditional U.S. Open setup.”

Rain was expected to yield to plenty of sun over the next four days, with the strongest wind on Thursday. Davis said he already has called several audibles on the original plan of where to put the pins on the greens, an example of the USGA not wanting the course to get on the wild side.

Davis also said the winning score is not an issue at a major where par tends to be at a premium.

“Never since I’ve been at the USGA — and it’s been almost 30 years — I’ve never heard anybody at the USGA say we’re shooting for even par,” Davis said. “But we talk incessantly, ‘How do we get the course to be really a great test of golf?’ As we say, get all 14 clubs dirty to make sure that these players are tested to the nth degree.”

And what makes a good championship inside the ropes?

The quality of the winner? Different players have won the last 15 U.S. Opens, the longest stretch of the four majors. The margin? The last playoff was 10 years ago when Tiger Woods won at Torrey Pines. Three of the last four U.S. Opens have been decided by three shots or more.

This U.S. Open is not lacking for either. Five players have a chance to replace Dustin Johnson at No. 1 in the world this week. Woods is hitting the ball well enough to win any week if he ever gets all parts of his game working together. To win a record-tying fourth U.S. Open would cap off an unlikely comeback following four back surgeries. Phil Mickelson, in the USGA record book with his six runner-up finishes, needs only this trophy to complete the career Grand Slam.

“And then just a good test of golf where people think, ‘Wow, they’ve really stepped up and played great golf under pressure,”’ Rose added. “I think that’s what people would like to see in this tournament is that guys are tested to the ends of the ability, to whether they can cope or not. And I think that’s part of the charm … not charm, but part of the allure of this tournament.”

The ultimate test starts Thursday. Results won’t be available until the end of the week.