UBC off to hot start at Canadian University/College Championship 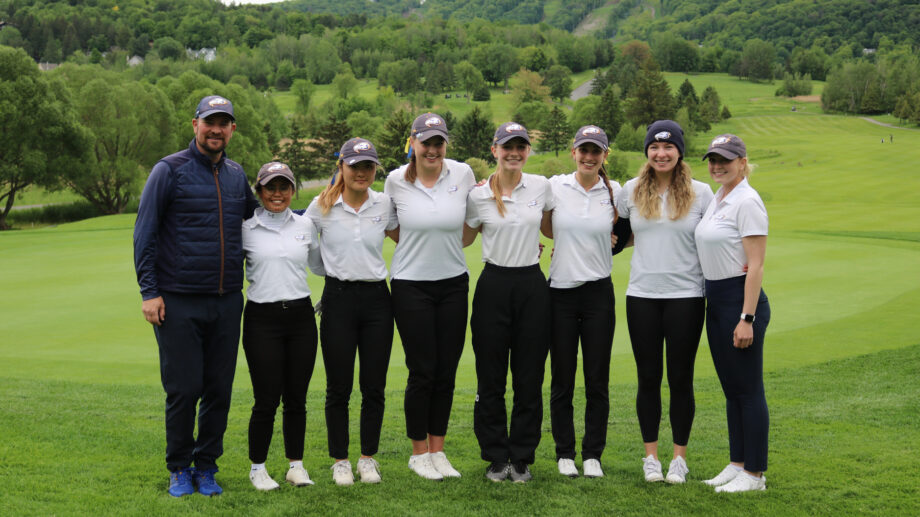 The University of British Columbia's women's golf team on day one at the 202 Canadian University/College Championship at Golf Chateau Bromont in Bromont, Que.
Golf Canada

Bromont, Que. – Albeit three years later, the University of British Columbia Thunderbirds picked up right where they left off at the Canadian University/College Championship, presented by BDO: on top of the leaderboards.

The T-Birds took a commanding 26-stroke lead in the women’s division, while the men’s squad will enter round two at Golf Château Bromont with a four-stroke lead of their own.

Élizabeth Labbé and Grace Bell lead the charge for the women’s team, firing rounds of 4-under 68 and 3-under 69, respectively. The Thunderbirds duo sit 1-2 atop the leaderboard in the individual competition.

Aidan Schumer, a member of the UBC men’s team, and Samuel Breton Gagnon of the Champlain St-Lawrence Lions share the lead at 5-under in the men’s individual competition.

Labbé, a native of Québec who plays her university golf on the west coast, returned home to La Belle Province and used the familiarity of the course to her advantage.

“I think there’s a fairly good advantage to being familiar with the greens, so my putting was really good today,” said Labbé. ‘‘I gave myself a lot of opportunities and I was able to convert some of them,” added the first-year student, who says she has played multiple events at Golf Château Bromont as a junior.

The Lévis, Que., native caught fire midway through her round, rolling in a pair of birdies and an eagle during a three-hole stretch (nos. 8 to 10).

“I just tried to stay calm and roll with it” said Labbé who, admittedly, even surprised herself.

Breton Gagnon, a native of nearby Quebec City, Que., went out with a bogey-free 4-under 32 before shooting a 1-under 35 on the back nine to finish tied for the lead atop the men’s individual leaderboard.

At the mere age of 18, the Champlain St-Lawrence showed maturity beyond his years at a course he says he knows well. When asked about any possibility of an intimidation factor, Breton Gagnon was quick to shut it down.

Hayley McCallum (Humber College) and Sonja Tang (UBC) finished with a 4-over 76 and are T3 entering Thursday’s second round. Lexie McKay (Western Mustangs) rounded out the top-5 with a 6-over 78.

Matthew Morris (Brock University) and Jacob Armstrong (University of the Fraser Valley) are neck-and-neck at 3-under par, tied for third place.

Armstrong, a third-year student, says this tournament was a long time coming for him and his team from B.C.

“I’ve been waiting for this for a long time, so to get off to a strong start was neat. After waiting so long, I’m very excited to be here this week – especially at a course like this,” said Armstrong.