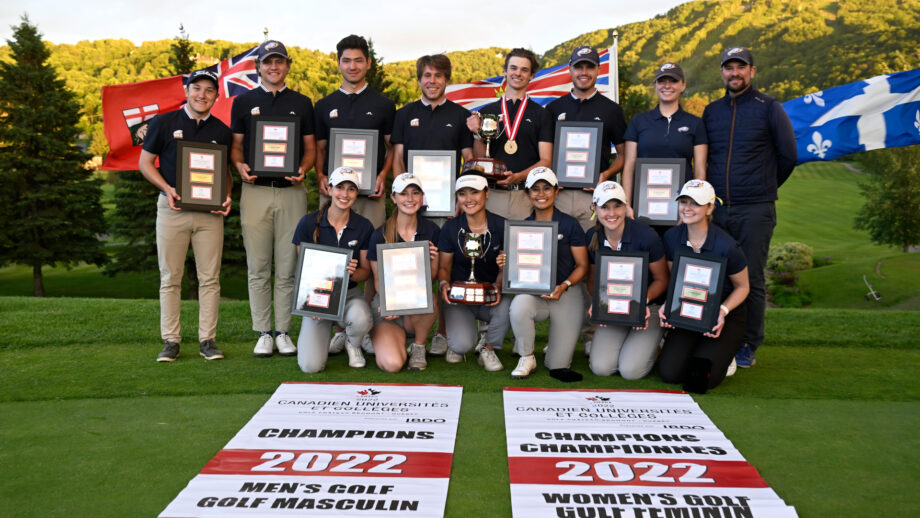 Bromont, Que. – The University of British Columbia’s golf team did it again, completing the four-division sweep at the 2022 Canadian University/College Championship, presented by BDO and cementing their status as a dynasty in Canadian collegiate golf.

The T-Birds won the women’s team division for the fifth time in a row, and fifteenth time in the 18-year history of the event, while the men’s earned their seventh banner since the inaugural event in 2003. Aidan Schumer and Sonja Tang were crowned champions of the men’s and women’s individual events, respectively.

“We’ve probably been through as many hard times as good times […] It’s just been an incredible year – I’m very proud of them,” said head coach Chris MacDonald. “Everyone at this tournament works hard; they’re willing to put the extra time in [and] I think there’s a certain level of internal chemistry,” he said of the bond between the men’s and women’s teams.

The Thunderbirds women’s 98 stroke triumph sets the record for the largest margin of victory since 2004 and caps off a perfect season of 12 tournament wins is as many events played. The team of Sonja Tang, Élizabeth Labbé, Shania Remandaban and Grace Bell finished off a wire-to-wire win with a final round 3-over par 219.

“We work really hard, everyone here pushes each other on and off the course and it’s just really nice to have one last win in Canada,” said Tang, the 2022 Canadian University/College Women’s Individual Champion.

On the men’s side, team captain Ethan De Graaf, Aiden Schumer, Mackenzie Bickell, Russell Howlett and Dylan MacDonald combined for a tournament score of 7-under par 1145 for an eight-stroke victory over the Université de Laval Rouge et Or (1-over par 1153). The University of Victoria Vikes rounded out the top three at a total of 8-over par 1160.

Despite trailing by four strokes entering the final round, Tang pulled off the comeback, one even she didn’t think was possible.

“I still can’t believe it; I was back by four, I didn’t really think I had a chance but I just kept my head down and played,” she said. “I think I played pretty decent today.”

Decent is an understatement to Tang’s performance. After a one hour and 50-minute weather delay interrupted her final round, the Vancouver B.C., native headed back onto the course and withstood the howling wind conditions enroute to a final round 1-under par 71, to win by three strokes over her teammate Labbé. Remandaban and Bell rounded out the all-UBC top four.

Schumer held a one stroke lead entering the final round but dropped into a tie for the lead with Jacob Armstrong – one of the three second place finishers, along with Samuel Breton Gagnon and Alexis Leray – midway through his round. The Columbus, Ohio, native stepped on the gas late in his round to escape the pack and earn the title of 2022 Canadian University/College Men’s Individual Champion.

“I did have an idea [of the leaderboard] somewhat. I don’t think it was the worse thing in world. I knew the guys were struggling a little bit on the back nine, so I really felt a push to do something for not just myself, but for the guys,” he said. “I had those two birdies on five and six, that really just got me going and I put myself in a good place to comfortably come down the stretch and take it.”

For the 19-year-old, the win is no drop in the bucket.

“I am very privileged to be in this spot and I really have to enjoy it no matter what,” said Schumer. “I had to keep it in perspective, and I just focused on what I’ve been practicing my whole life.”

Schumer, who last won a tournament three years ago at the Ohio High School State Championship, says this was the biggest win in his young career as a golfer, but was quick to note that it was more than just a personal achievement.

“It’s hard to process right now, it still hasn’t fully sunken in [but] this is for the guys, this is for UBC,” he said.

Click here for more information including the leaderboard, final round pairings and course information.