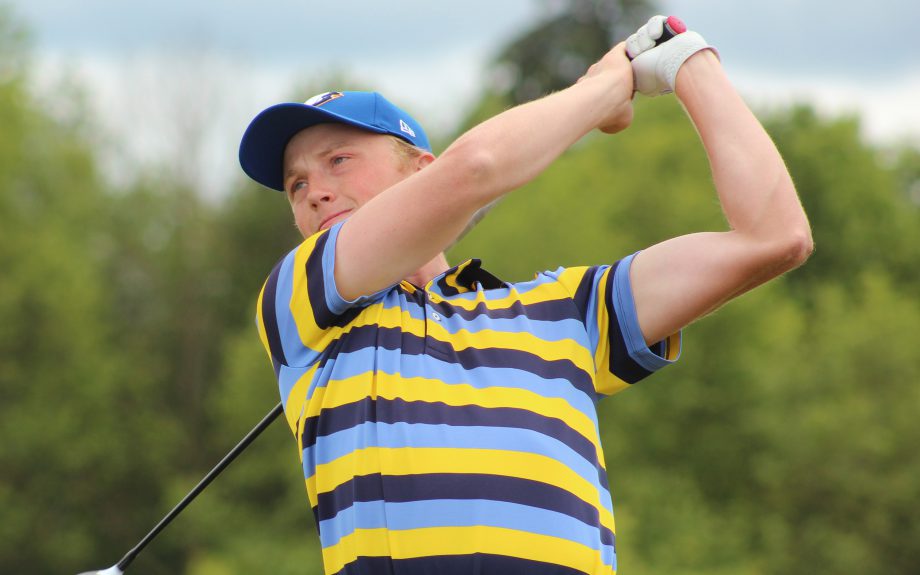 PARKSVILLE, B.C. – Third-round action at the 14th playing of the Canadian University/College Championship at Morningstar Golf Club saw the teams representing the University of British Columbia (UBC) increase their leads atop their respective leaderboards.

The UBC men’s team continued to show its dominance by posting a collective 2-under 286 for the round. The Queen’s University Gaels occupy second with a team total of 7-over 887 – 43-strokes behind the leaders. The Kingston, Ont., university is being pursued by two institutions located in British Columbia: the University of Fraser Valley Cascades and the University of Victoria Vikes, who trail the Gaels by four and five strokes, respectively.

The Thunderbirds were led by a 3-under 69 from Jack Wood of Banff, Alta. The third-year kinesiology major collected five birdies and added an eagle on the par-5 13th hole to move to 5-under in the competition. Tied with Victoria’s Lawren Rowe of the Victoria Vikes, Wood trails individual leader and teammate Scott Secord by four strokes. The Calgary product carded a 73 after opening the competition with consecutive 67s.

For the third consecutive day, Thunderbirds Evan Holmes of Calgary and Victoria’s Nate Ollis registered matching rounds. The pair have now shot 72-71-72 and sit T5 at 1-under alongside British Columbians Connor McLellan of Chilliwack who plays for the Cascades and Richmond’s Chris Crisologo, a member of the Simon Fraser University Clan.

Completing the Thunderbird contingent is Andrew Harrison of Camrose, Alta., who sits fourth following a 1-over performance. The 19-year-old tallied five birdies, but sees the round as a missed opportunity. “Today was a little bit disappointing,” commented the kinesiology major. “I had a good chance to shoot a good number, but made some bad bogeys. It’s a nice course, but it’s very tricky. There are lots of dog-legs that can trick you into trying to cut some corners. You have to be patient and lay back on those.”

The team’s rookie reflected pensively on his first year donning the blue and gold of the Thunderbirds. “It’s been pretty good. Jack and Evan have been great. I’ve known them for a very long time from Alberta, so it wasn’t too hard fitting in with them. We have a pretty young team and they’re great guys – easy to talk to; easy to be around – so it’s been fun.”

“College is very different, it’s interesting,” added Harrison, when asked about the experience of playing in this competition. “You’re playing against men unlike junior, where you’re playing against kids. I’m really taking it all in and learning a lot from all the older guys.”

After opening the third round with a five-stroke advantage, the UBC women’s team tallied a 16-over total on the day and now lead the Université de Montréal Carabins by 12 strokes. The University of Toronto Varsity Blues climbed into third at a combined 64-over 712, led by the T6 standings of Ontarians Sarah Dunning of Waterloo and Etobicoke’s Laura Upenieks, who made a hole-in-one on the par-3 eighth hole.

Thunderbird Kat Kennedy made a significant climb up the standings for the second straight day. The native of Okotoks, Alta., carded a round of 5-over 77 and at 11-over-par, leads the competition by one stroke. After holding the 18- and 36-hole leads, the Université Laval Rouge et Or’s Alexandra Pelletier now sits one-stroke shy of the leader. The native of Montréal was 13-over on the day after opening 71-72 in the competition. Porto, Portugal’s Barbara Neto-Bradley of the Thunderbirds moved into third-place at 13-over.

The final round of competition will see both the men’s and women’s sides begin the day at 7:30 a.m. off split tees. Additional information regarding the championship, including pairings and up-to-date scoring can be found here.