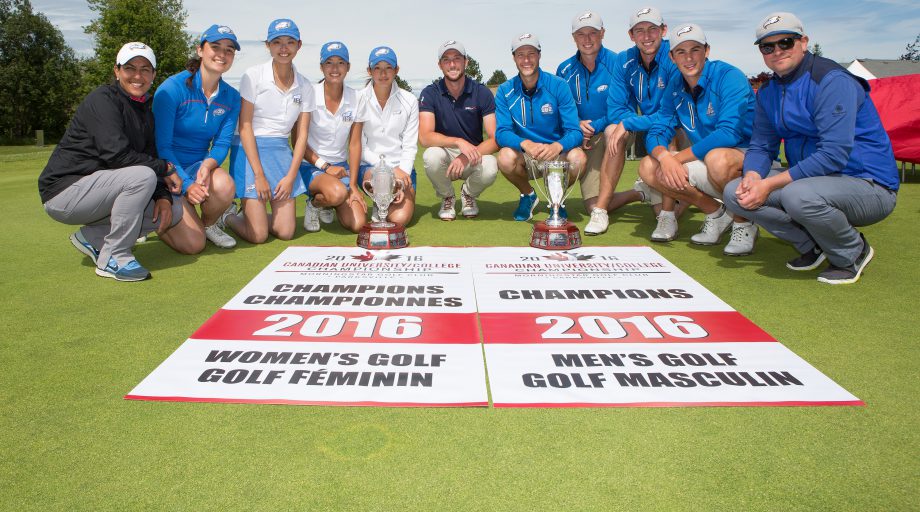 PARKSVILLE, B.C. – The University of British Columbia (UBC) Thunderbirds claimed team and individual honours on both the men’s and women’s sides at the 2016 Canadian University/College Championship at Morningstar Golf Club. All four titles have never been captured by the same school in the competition’s 14-year history.

UBC Coach Chris MacDonald who was named the Golf Coaches Association of Canada’s Coach of the Year for both the men’s and women’s teams, reflected positively on his team and the state of Canadian collegiate golf. “This means a lot. It’s an exciting time and we’re going in a better direction. It’s just nice to see consistent golf and to see how much this tournament has grown – not just from our team, but the entire field.”

For the second time since this tournament’s inception in 2003, UBC earned both team titles – a feat that has not been matched by another school. UBC came just shy of sweeping the four honours in 2009, only missing out on the women’s individual title. Kat Kennedy of Okotoks, Alta., ensured this year’s team would not suffer the same fate, carding a 1-over 73 en route to a four-stroke victory.

“Before we went out today, as a team, we talked about staying in our own bubble and taking it one shot at a time,” said the 21-year-old. “I think I went out there with that mindset and it helped me today. I’ve put in a lot of time and practice after some injuries this year. This was a big win for me and to see my hard work pay off is a big push for next year and for the rest of my golf career.”

The significance of the victory was not lost on the third-year science student. “Golf Canada has been a big part of my life. I have played a lot of junior golf with Golf Canada. This is a big title to have and I’m not used to it yet. It’s great to be a national champion.”

Alexandra Pelletier of the Université Laval Rouge et Or claimed runner-up honours. The Montréal native tallied two birdies and finished the competition at 16-over-par. UBC’s Barbara Neto-Bradley, of Porto, Portugal, claimed third-place with a four-day total of 22-over 310.

The UBC women claimed a 19-stroke victory over the defending champions, the Université de Montréal Carabins, and the University of Toronto Varsity Blues, who tied for second at a combined 79-over-par.

Kennedy beamed when asked about wearing the blue and gold of the UBC Thunderbirds. “It is a big honour. We have a great team. I feel like everyone is very supportive. We help push each other to be more competitive. Everywhere I go, I wear the T-bird with pride. I couldn’t be more proud of both the women’s and men’s teams.”

For the second straight year, UBC’s men’s team claimed a wire-to-wire victory. It was the fifth team title for the men’s side and their third in the past four years. The fivesome finished 2-over on the day to complete the tournament at 18-under 1134 – 45-strokes clear of the competition. The University of Victoria Vikes were 1-under on the day and placed second, while the Queen’s University Gaels finished third.

The men’s Thunderbirds were again led by Scott Secord, who registered a wire-to-wire win of his own. The Calgarian finished with rounds of 67-67-73-70 to reach 11-under 277 in the competition. All five members of the quintet finished in the Top-10 with Andrew Harrison of Camrose, Alta., taking 9th, Victoria’s Nate Ollis finishing T7, Evan Holmes of Calgary claiming 6th and fellow Albertan Jack Wood of Banff placing 4th.

Secord spoke of the tight-knit group when asked about his tenure as a Thunderbird. “It’s meant a lot. I’m glad I could finish (my career with UBC) like this and as a team, as well. I’ve known Jack since he was a little tyke. We’ve had a different kind of relationship – like brothers. But that’s what it’s like with everyone. We’re such good friends with each other.”

Despite gusty conditions at times, Secord tallied four birdies on the day, including two back-to-back in a bogey-free back nine. “I was kind of steady throughout the front,” commented the champion. “It was pretty windy and it was shifting. The trees were playing tricks on us and we weren’t really certain which way it was going.”

The 23-year-old withstood the impressive play of Lawren Rowe of the University of Victoria Vikes. The Sophomore who hails from Victoria notched four birdies on the day to finish 2-under – four shots shy of the champion. Taking third was the University of the Fraser Valley’s Connor McLellan of Chilliwack, B.C., who carded the day’s low round – a four-birdie 4-under 68 showing – to finish 5-under in the competition.

Additional information regarding the championship can be found here.