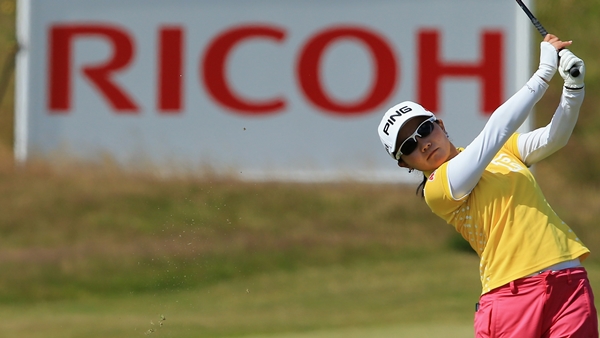 SOUTHPORT, England – Ayako Uehara of Japan felt confident with the putter and played in the best weather Royal Birkdale has to offer. It was the right combination to take the lead Thursday in the Women’s British Open. And the best she could manage was a 4-under 68.

Pot bunkers can present problems on any links course. Throw in some thick grass and par becomes a problem.

Michelle Wie could attest to that. The U.S. Women’s Open champion spent too much time chipping out of sand and rough on her way to a 75. Cristie Kerr didn’t make a birdie, shot 81 and withdrew with a sore back. Only nine players broke par, all but two of them in the relative calm of a sunny morning along the Irish Sea.

“It’s only going to get harder,” defending champion Stacy Lewis said after a 71. “Anything under par on this golf course is a good score.”

Uehara got her lone mistake out of the way early and made another bogey after the opening hole. She made three birdies in a four-hole stretch, added two birdies on the back nine and built a one-shot lead over Mo Martin.

“Ayako obviously put up a really good number,” said Lewis, who played in her group. “She seems like she wasn’t in trouble at all. She was just greens, greens, center of the green. You can kind of learn a little bit from that and maybe not go at so many pins.”

Morgan Pressel scrambled her way to a 70, joined by Sarah Kemp and Mina Harigae. The only players who broke par in the afternoon were former U.S. Women’s Open champion So Yeon Ryu and Amy Yang, who played in the final group at the U.S. Women’s Open last month. Both shot 71.

“I don’t think they can make it any easier,” Pressel said.

That doesn’t bode well for Wie, who was introduced on the first tee as the U.S Women’s Open champion and then posted her highest score of the year. Wie had to birdie the par-5 18th hole – the only time she hit driver – to finish 3 over.

Canada’s Alena Sharp, the lone Canuck in the field, did fare better than Wie. The Hamilton, Ont. native carded a 2-over 74.

The scores Thursday might have been a preview of what the men can expect next week at Royal Liverpool for The Open Championship, through Royal Birkdale is a stronger test. The links courses are separated by about 25 miles, and a wet spring has allowed the grass to get thick and lush. That makes it difficult to make contact with the golf ball, assuming it can be found. Tiger Woods won at Liverpool in 2006 on a fast course with wispy grass.

“The golf course is so hard, I couldn’t imagine four days of this much rough and all the wind and everything it entails,” Lewis said “It’s nice to have it pretty calm today.”

Pressel had 23 putts, though only four of them were for birdie. She escaped with par when she found trouble off the tee and one time salvaged bogey. Playing her third shot from the right rough to a pin on the right side of the tough 16th green protected by a pot bunker, Pressel played short of the green and got up-and-down to limit the damage. Her putter made all the difference.

“I was happy that I made it look easier than it actually was,” Pressel said.

Paula Creamer was 5-over par after five holes and rallied for a 75. The best comeback belonged to Jessica Korda, who went out in 39 and then made four birdies on the back nine to return to even par. Karrie Webb, Inbee Park, Suzann Pettersen and Kraft Nabisco champion Lexi Thompson also were at even par.

The way it looked Thursday, anyone around par might be in good shape when it ends on Sunday.

Wie now has to climb back on a course that makes it feel as though she has to scale a mountain. She tried to rely on her powerful stinger off the tee, using mostly hybrids, to stay short of the bunkers and out of the rough. But she hit only seven fairways, leading to three of her bogeys.

“I definitely felt like my tempo was a little bit off,” Wie said. “But it’s a long way until Sunday, and I battled out there. It’s not the score I was looking forward to on Thursday, but it could have been a lot worse.”

Martin had a plan for Birkdale, too. She is one of the shorter hitters on the LPGA Tour and can’t recall a round where she hit so many 3-woods off the tee, all in an effort to stay out of trouble.

“Every hole, every shot is its own test,” Martin said. “You just really have to have so much strategy. It keeps you in the moment and it’s a challenge. It’s a fun challenge.”