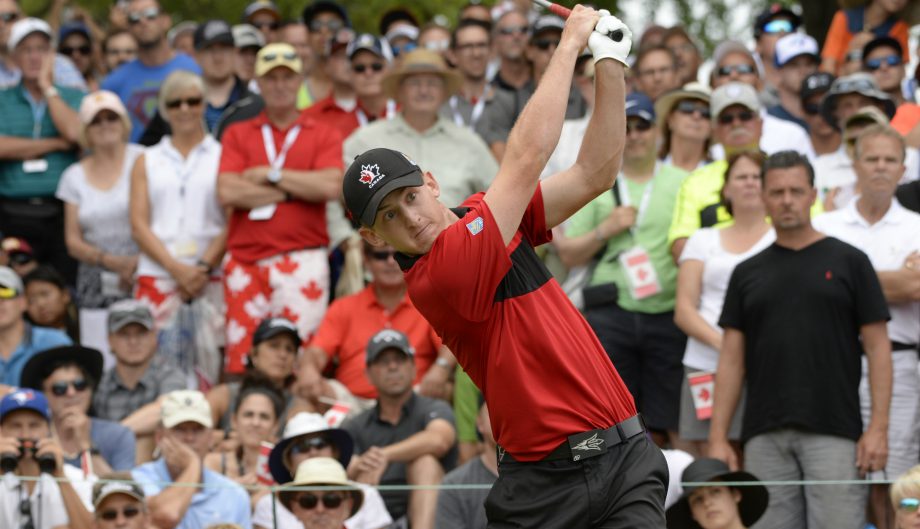 Jared du Toit’s exceptional play at Glen Abbey proved he’s got the game to battle with the big boys. Now he wants another crack.

Cliché as it might sound, Jared du Toit’s gameplan was to treat the 2016 RBC Canadian Open — his first tee time at a PGA Tour showdown — like any other event.

Except that he wasn’t banking on this.

“At normal tournaments for me on the road, I would turn on the TV in my hotel room at night and I’d watch SportsCentre,” du Toit said of his usual unwind. “But I couldn’t really turn on the TV because it seemed like every sports channel had a big headline on it that I’d see and then, ‘Wow, flip the channel.’

“I didn’t want to get too caught up in it, especially not seeing that before.”

On Sportsnet, on TSN, on Golf Channel . . . du Toit was the hot topic. He was the talk of the tee, too, at courses across the country.

Representing Golf Canada’s National Amateur Squad on an exemption, the 21-year-old from Kimberley, B.C., sizzled into contention that week at Glen Abbey, a fairy-tale rise from relative unknown to realistic contender.

He opened with a lap of five-under 67, just one shot off the pace. With spins of 71 and 70, his name was never far from the top of the leaderboard during the middle rounds.

And by draining a 40-footer for eagle on Saturday’s concluding hole, he earned a spot in Sunday’s final group with a serious shot to become the first homegrown golfer to win the Canada’s National Open Championship since Pat Fletcher in 1954.

Du Toit closed with another 71, finishing three strokes behind eventual champion Jhonattan Vegas in a tie for ninth. He was tops among Canadians and an unfathomable 17 strokes better than the next-best amateur.

Jason Day, who arrived at Glen Abbey as the top-ranked player on the planet, was a couple shots back in his rearview mirror.

“We knew Jared had the game,” said Derek Ingram, Golf Canada’s national men’s coach. “But to have the moxie and the confidence to be in that position all week and to really thrive and enjoy it and to eat that up and really not let it faze him at all, I think that’s probably what impressed me the most.

“Other guys have the game to do that. But there’s a difference between having the game and doing it with all those people around and doing it under the pressure and under the heat. That’s what really stands out for me.”

What really stands out for du Toit? Oooooh boy, take a seat.

A polite and polished young man, du Toit bubbles with enthusiasm when you mention that muggy and memorable week last July, almost as if it happened yesterday.

The support of a patriotic crowd was, as he repeated again and again, “unbelievable.” There was encouragement from inside the ropes too, from the likely sources — Graham DeLaet, Adam Hadwin, Nick Taylor and the rest of the Canadian contingent.

And unlikely sources, such as his playing partner on that special Sunday, an established star who won the FedEx Cup in 2012 and owns eight PGA Tour trophies.

“Brandt Snedeker, that final day, he was kind of rooting me on all day just making me feel great,” du Toit described. “I kind of got off to a slow start and the whole time he was like, ‘OK, keep plucking away, keep plucking away.’ I finally made a birdie on my eighth hole and he was clapping and he fist-bumped me and said, ‘OK, let’s go.’ That was very cool.”

Du Toit, naturally, learned a ton at Glen Abbey, but another important lesson came in the weeks that followed.

“Just playing other amateur events and college events after, I put a lot of stress on myself to play well, to kind of live up to what I had done, because I didn’t want to be that guy that just played well one week,” he admitted. “I did put a lot of pressure on myself, and I performed poorly because I was too high-strung on the golf course.

“Yeah, it was a good week and if that was an amateur event, I probably would have won that amateur event. But it was one week, and just understanding that has been really good for me — realizing my process and what I did to prepare and where my swing was that week. It’s just that kind of understanding of what put me in that position to succeed rather than trying hard to succeed every week.

“Continuing to do all the little things right will eventually work out long term. In a shorter scale, I guess, that kind of worked out and taught me a lesson.”

He must be a quick study because du Toit enjoyed a stellar senior campaign with the Arizona State Sun Devils, including a triumph at The Prestige at PGA West in mid-February.

He’ll graduate with a degree in marketing, but his preference is to earn his pay on the fairways and greens. He certainly hasn’t been slacking on his homework.

“I think one of the things that has made the biggest difference for him is just having tremendous habits and routines,” said Ingram. “It doesn’t sound very sexy, but it just works really well. He’s a guy who works extremely hard. He’s very smart. He’s a good athlete, from a multi-sport background. I think those things are really starting to translate to a guy who can be a very, very good professional golfer.

“If you plop him down on the PGA Tour, we like his chances.”

Du Toit would love to be plopped down on the PGA Tour. He would have told you that years ago. His remarkable run at the 2016 RBC Canadian Open only provided reassurance.

“It was definitely everything I dreamed it would be, and even more,” du Toit said. “Just seeing that my game, playing my best, that I can compete and I can make a living on tour . . . I mean, that’s the goal. It just validated my dreams and what I’ve been working on and how I’ve been working on it.”