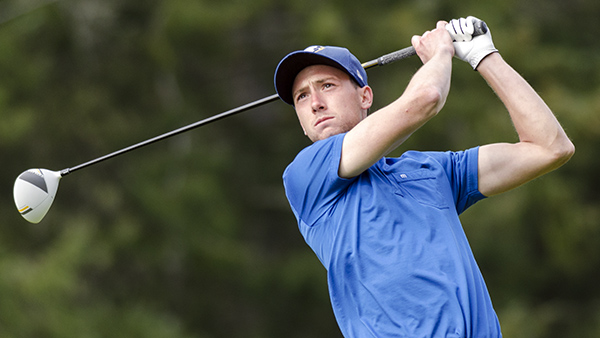 WINNIPEG (Golf Canada) – Scott Secord of the University of British Columbia Thunderbirds stole the show on Wednesday at the Canadian University/College Championship by firing a competitive course record 7-under 65.

The Calgary native’s second round was highlighted by a six birdies and an eagle on the par-5 4th hole at Southwood Golf and Country Club in Winnipeg, Man.

“It was a lot of fun today, I played with a couple of good guys and we created some group mojo and kind of pushed each other,” Secord said. “We weren’t really thinking about scores, just birdies chances.”

Secord’s Thunderbirds’ teammates also stepped up on Wednesday morning as they soared into the lead after carding a 6-under 282. Individually, UBC’s Jack Wood posted a 2-under 70 and currently shares second place at 2-under 142 alongside the University of Alberta’s Quinn Bunten-Walberg, who posted the second low round of the day after a 5-under 67. Université Laval Rouge et Or’s Samuel Rochette, Russell Bowie of Queen’s University and Alex Dumais of the Humber College Hawks also trail Secord by nine strokes in second place.

“I’m not going to underestimate anyone out here,” Secord said about his competition. “The course is excellent, the greens are great for the winter they had, so I just have to keep attacking.”

In the team competition, the Thunderbirds hold a 9-stroke lead over the Western University Mustangs. The Mustangs posted a 7-over 295 and currently sit one-stroke ahead of the University of Manitoba Bisons who carded a 1-under 287.

On the women’s side, the Thunderbirds stumbled on Wednesday but were able to hang onto their overnight lead in the team division. The squad ended the second round at 23-over 455 for the championship, 11 strokes ahead of Université de Montréal Carabins who are defending their title this week.  The Carabins rebounded on Wednesday with a 10-over 226.

Individually, the University of Victoria’s Megan Woodland matched the low round of the day on the women’s side after an even-par 72. Woodland’s round was highlighted by a 2-under 34 opening-nine and leaves her tied for the lead with the University of Toronto’s, Laura Upenieks at 5-over 149. Upenieks carded a 2-over 74 after opening with a 3-over 75 on Tuesday.

Woodland has had a couple of close calls at this national championship and hopes to continue her strong play over the final two days.

“It’s basically been my goal since my first year to come out and win one of these events,” the Vikes veteran player said. “I’ve come close the past three years and haven’t really been able to finish it off, so it’s kind of been my goal all year and I hope I can play well the next two days.”

For more information on the 2014 Canadian University/College Championship including starting times and results click here.