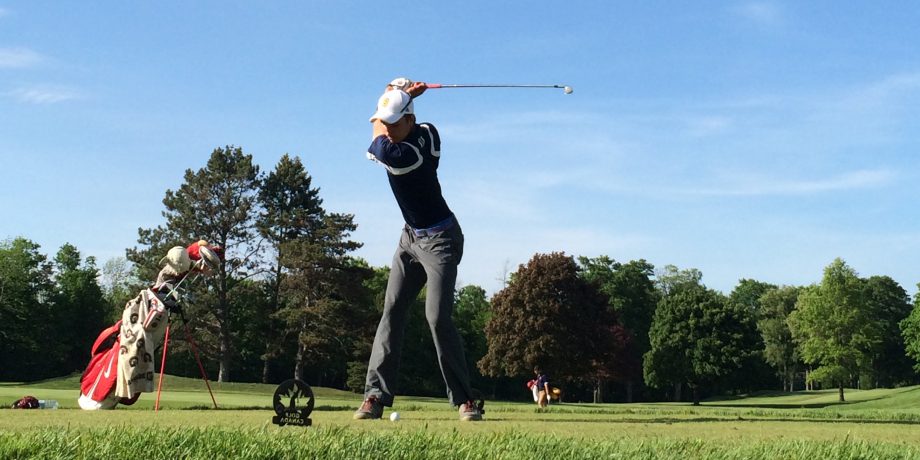 Guelph, Ont. (Golf Canada) – Gusty winds proved to be no problem for the University of British Columbia (UBC) Thunderbirds at the Canadian University/ College Championship at Cutten Fields in Guelph, Ont. The tournament teed up for the first round on Tuesday with the Thunderbirds men’s team soaring to the top of the leaderboard. UBC’s women’s contingent ended their day tied with the University of Toronto Varsity Blues atop the standings.

The Thunderbirds men’s team shot a combined 2-over-par to gain a slight edge in its quest to avenge last year’s runner-up finish. The Humber College Hawks sit three shots back of the lead while the University of Victoria Vikes round out the top three.

The defending men’s champion, Calgary native Scott Secord, and Humber Hawk Christian McCullough carded 2-under-par 68s to lead the men’s division. Six golfers are locked in third place, two strokes back of the leaders, including a pair of Vikes in Andrew Funk and Michael Griffin.

The reigning champion UBC Thunderbirds women’s team is joined at the top of the leaderboard by the University of Toronto Varsity Blues. UBC is eyeing its 11th team championship in the 13 years of this competition. The leaders each registered 17 over par team performances and are four strokes clear of the third place Université de Montréal Carabins.

Third-year Carabins player Caroline Ciot has a two-shot lead after opening at 1-over-par 72 on the strength of a trio of birdies. Tied for second at 3 over par are Alexandra Pelletier of Université Laval Rouge et Or and Okotoks, Alta. native Kat Kennedy whose steady play tops the Thunderbirds squad. Playing key roles in the Varsity Blues’ co-leading position were Rylie Wilson and Sarah Dunning who each opened at 76 – good for a share of fifth place.

For more info regarding the championship event, click here.