US extends Solheim Cup lead over Europe to 5 points 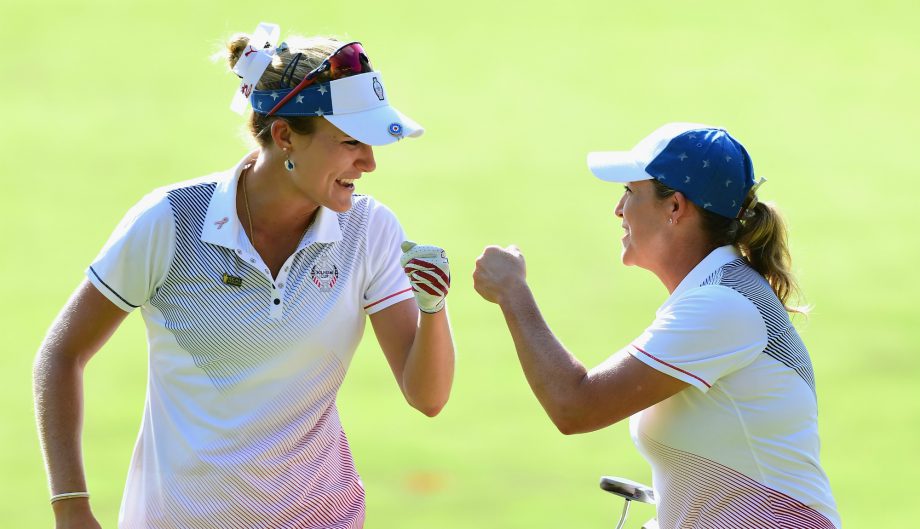 Only the biggest letdown the event has ever seen will keep the Americans from retaining the cup.

The United States took a 10 1/2- 5 1/2 lead over Europe on Saturday, matching its biggest advantage entering the final day.

The Americans took three of the four afternoon fourball matches after splitting the morning foursomes at Des Moines Golf and Country Club. The biennial event concludes Sunday with 12 singles matches.

Cristie Kerr set a record for career points by an American with 20, teaming with Lexi Thompson to win both of her matches. U.S. captain Juli Inkster held the previous mark with 18 1/2.

Kerr and Thompson beat Jodi Ewart Shadoff and Caroline Masson 5 and 3 in the morning, and topped Georgia Hall and Catriona Matthew 4 and 2 in the afternoon.

In the other U.S. afternoon victories, Brittany Lincicome and Brittany Lang beat Carlota Ciganda and Mel Reid 2 up, and Ernst and Paula Creamer edged Karine Icher and Madalene Sagstrom 2 and 1. Shadoff and Anna Nordqvist beat Lizette Salas and Angel Yin 4 and 2 for Europe’s lone point.

Creamer and Ernst also won in the morning, topping Reid and Emily Pedersen 5 and 3. Europe took the other foursomes, with Nordqvist and Hall beating Stacy Lewis and Gerina Piller 2 and 1, and Matthew and Karine Icher defeated Michelle Wie and Danielle Kang 2 and 1.

“I’m ecstatic,” Inkster said. “I think anytime we can split in foursomes that’s a win for us.”

Lincicome started her round with six straight birdies _ and Lang made eagle on No. 7 by holing out from about 100 yards. The Europeans were within a hole of tying the match for much of the back nine, but Lang put her approach on the 18th hole within inches.

“It just seemed like the hole was the size of Texas. It made it easier,” Lincicome said.

Creamer and Ernst never trailed in winning their second matchup of the day.

Kerr holed out from a sand trap on No. 15 for an eagle that essentially sealed the match _ though Matthew missed a long putt that would’ve extended it by less than a foot.

No team has ever rallied from more than four points down to win at either the Solheim Cup or the men’s Ryder Cup.

But Nordqvist, who has yet to lose this week, is hoping to do to the Americans on Sunday what they did to Europe two years ago in Germany.

In those matches at St. Leon-Rot, the U.S. _ infuriated by Suzann Pettersen’s claim that Europe hadn’t conceded a short putt to Alison Lee in the completion of the rain-delayed fourballs _ overcame a 10-6 deficit entering the singles to win 14 1/2-13 1/2.

“We saw what happened in ’15,” Nordqvist said. “If there are matches left, I think there’s still a chance.”