US holds on to win the Presidents Cup 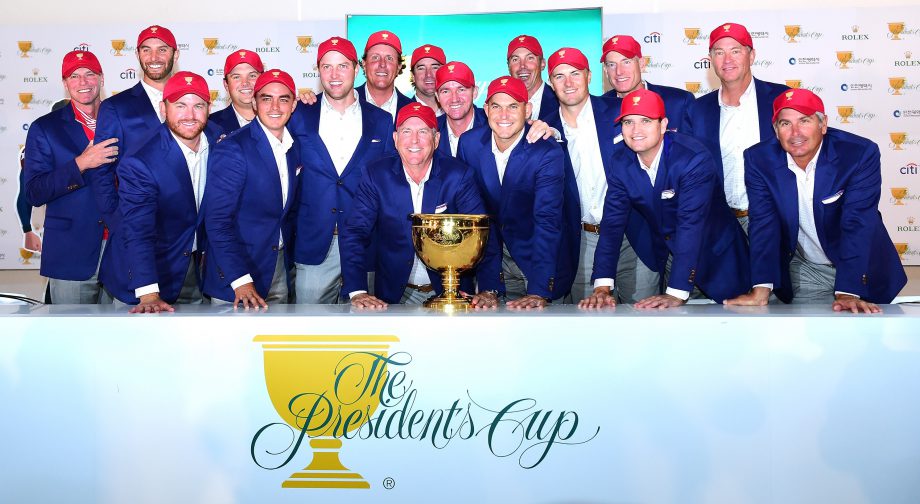 INCHEON, South Korea – The final hour when both teams thought they had it won. The clutch putt that turned a rookie into the hero. The stubbed chip that made the local star cover his face with both hands as if he wanted to hide.

The Presidents Cup, packed with raw emotion and endless nerves, was unlike any other over the last 10 years.

Except for the outcome.

The Americans won for the sixth straight time Sunday when Chris Kirk made a 15-foot birdie putt to win his match in a stunning turnaround on the final hole, and Bill Haas provided a storybook ending with the winning point for his team and for his father.

“A moment I’ll never forget,” U.S. captain Jay Haas said, so choked up when it ended that he couldn’t speak.

Haas used a captain’s pick on his son, sent him off in the 12th and final singles match at the Jack Nicklaus golf Club Korea and then saw Bill Haas hit all the right shots to hold off Bae Sang-moon for a 2-up victory.

That’s what the International team wanted when it demanded the number of matches be reduced (from 34 to 30). It almost got something even better _ the shiny gold trophy that again stays with the Americans.

“Irrelevant of the outcome – we obviously would have loved to have won – we put on a show of golf this week,” captain Nick Price said.

The final session was not without its share of heartbreak.

Anirban Lahiri, the first player from India to make the International team, battled Kirk shot-for-shot over the final hour holes and looked like a winner when he played a delicate pitch to perfection on the par-5 18th and had 4 feet for birdie. Kirk’s chip ran 15 feet by. Based on the status of other matches still on the course, it looked like the International team would finally emerge a winner.

And then Kirk made his putt on the final turn, and one of the most stoic players on the PGA Tour unleashed a fist pump.

His putt caught the right edge of the cup and spun out, and he dropped his putter over his back in disbelief.

“I have to give credit to Chris for making that putt,” Lahiri said. “These things are scripted, I guess, and I wasn’t in the script this time.”

Neither was Bae, the only player under the Korean flag who was playing for the final time before he starts mandatory military service. When it became evident the Presidents Cup would be decided by his match with Haas, the American was 1 up and not giving away any shots. Bae holed a 10-foot putt on the 16th to halve the hole. He came within inches of holing a bunker shot on the 17th to halve the hole, which assured the Americans would do no worse than tie.

Facing that tough chip below the 18th green, Bae hit it heavy and the gallery groaned as it rolled back to his feet. He crouched over that covered his face as his caddie, Matt Minister, placed a hand on Bae’s shoulder to console him. Bae chipped about 12 feet by the hole, and when Haas blasted out of a bunker to 8 feet, Bae conceded the putt.

“I wanted to make the winning point for the team, but at the end of the day, our team lost,” Bae said. “So I was very sad and disappointed about it.”

The Americans had a one-point lead going into the decisive singles session, and for the longest time, appeared to be in control all day. They had early leads in nine matches. The International side had to have all the close matches go their way, and that’s what happened.

Marc Leishman took his first lead against Jordan Spieth on the 15th hole and made a 7-foot putt on the 18th for a 1-up victory. Hideki Matsuyama won the 18th hole with a birdie to beat J.B. Holmes.

Two halves were just as critical. Louis Oosthuizen hit a splendid second shot to 12 feet for eagle on the 18th and tied Patrick Reed, and Thongchai Jaidee escaped with a half-point against Bubba Watson in the most unlikely scenario. Thongchai drove into the water and saved par, while Watson missed a 5-foot birdie putt.

Phil Mickelson had an unbeaten record (3-0-1) for the third time in the Presidents Cup, trouncing Charl Schwartzel. Zach Johnson also went unbeaten in easily beating Jason Day, the PGA champion and No. 2 player in the world who failed to win a match this week.

The shortest match belonged to Adam Scott, who won six straight holes against Rickie Fowler and ended it on the 13th green.

Ultimately, though, the Americans were posing with the gold cup, just like always. The series now is 9-1-1 since the Presidents Cup began in 1994, though the International team headed home with belief they are getting closer.

It might have found a stalwart in Branden Grace, who went 5-0 to join Shigeki Maruyama as the only International player to win all five matches.

Scott now has played on more teams (7) of any player to have never won a Presidents Cup. He looked down the row at Grace, Matsuyama, Lahiri and Day and described them as the “future of this event.”

“They are the ones who are going to take it forward,” Scott said. “I’m tipping that every one of them is going to be excited to make the 2017 team after getting a taste of how close this was today.”