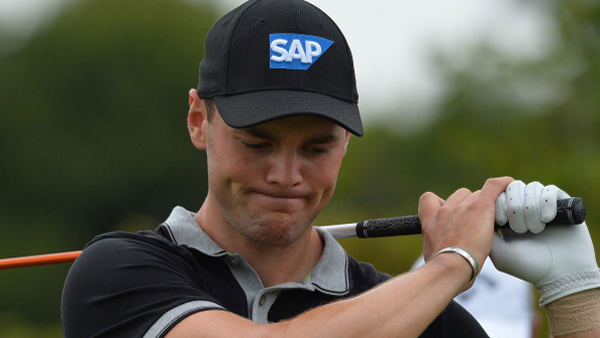 COLOGNE, Germany – Four players share the overnight lead from the second round of the BMW International Open, while U.S. Open winner Martin Kaymer failed to make the 4-under cut on Friday.

Local favorite Kaymer had three straight bogeys and a double bogey in a 1-over 73 that included four birdies. He finished on level par 144 overall.

“(This) was a big step for me to accept that you have golf courses that don’t suit your play . so it’s OK for me,” said Kaymer, who was born in nearby Duesseldorf.

“It is how it is. I did my very best and level par was the best I could do.”

Former champion Pablo Larrazabal made nine birdies – including five in a row – for a 9-under 63, matching the best round so far. The Spaniard is on 12 under overall with overnight leaders Danny Willett of England and Rafa Cabrera-Bello of Spain.

Emiliano Grillo of Argentina later carded his second successive 66 to join the leaders.

Cabrera-Bello double hit for his first missed shot of the week on the par-5 seventh but made five birdies while Willett, the 2012 tournament winner, stayed bogey-free to match his Spanish playing partner’s 4-under 68.

“I was a little unlucky coming down the last few holes but, overall, pleased with the minus four,” Cabrera-Bello said.

Andy Sullivan was level with the leaders with seven holes to play when play was suspended for almost 90 minutes due to a heavy storm. The Englishman dropped a shot on the par-5 No. 3 once play resumed and finished with a double bogey to finish on 9 under, three off the pace.

Paul Waring shot seven birdies and an eagle to complete a 63. The Englishman was in an eight-way tie for 11th on 9 under.

Second-ranked Henrik Stenson, who won in 2006, again finished the round 4 under with four birdies. The Swede is among a group of 10 players sharing 19th place including two-time winner Thomas Bjorn of Denmark on 8 under overall.

Former winner John Daly of the United States shot 67 and is tied for 29th on 7 under.