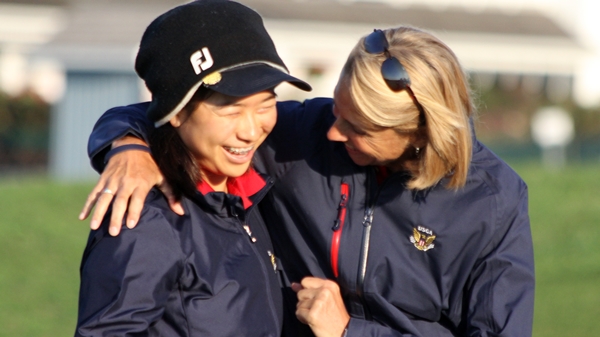 “I can’t be more proud of these kids; I’m really just their No. 1 fan,” said non-playing captain Courtney Myhrum on the team’s score of 10-under 278 through 36 holes. “To have a complete game and the age of 15 or 16 is amazing. Mika, Megan and Angel they just grind, absolutely grind. They just don’t get flustered. What I tell them is to relax, have fun, enjoy the moment and take one shot at a time. I’m just there to encourage them all the way around.”

Liu, 15, led the way for Team USA shooting 3-under 69 in a round that included two bogies, three birdies and a impressive eagle on the 380 yard, par-4, 10th hole at Angus Glen (South Course), holing out from 177 yards with a 5-hybrid.

“That eagle was amazing,” said Liu, currently the no. 48 ranked player on the World Amateur Golf Ranking. “I had 177 yards from the rough and on a downhill lie. My first plan was to get in on the green. I was between a 5-hyrid and a 5-wood and I decided to go with the hybrid to play it safe. I hit my shot and all of a sudden the Australian coach just started standing up and clapping and clapping. I was like, what’s going on? I got up there and my ball was in the hole. I just took it and kissed it. I was very happy.”

Yin (15) carded three birdies over three bogies for a second-round, even-par 72 as the second USA score to count while 16-year old teammate Megan Khang (67-73—140), the opening-round individual leader, shot a non-counting 1-over 73 to round out the USA team scores.