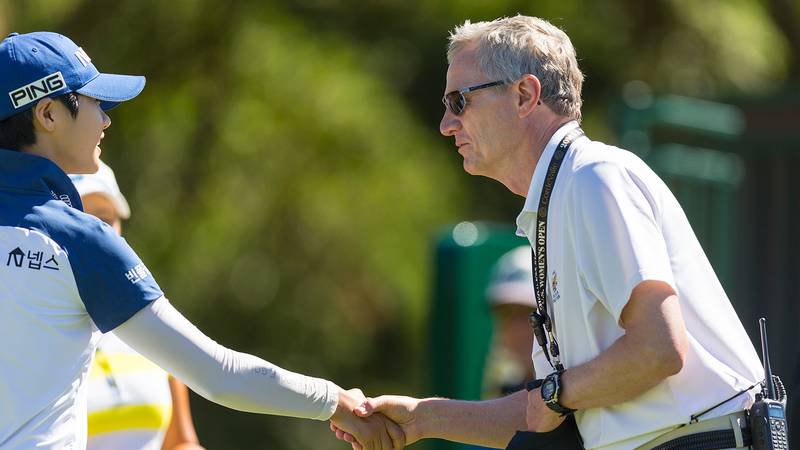 FAR HILLS, N.J. – Mark Newell, of McLean, Va., has been nominated to serve a one-year term as 65th president of the United States Golf Association (USGA) by the USGA Nominating Committee. He would replace Diana Murphy, who is completing her second and final one-year term.

Newell, a five-year member of the USGA Executive Committee, has chaired the Rules of Golf Committee since 2012. During that time, he has co-led the joint USGA/R&A Rules modernization project, which will result in major Rules changes in 2019. He also chaired the USGA Handicap Committee and spent four years as co-chair of the World Handicap Initiative, which developed the proposed USGA/R&A World Handicap System that is scheduled to debut in 2020.

Newell’s nomination comes alongside those of four new nominees to the Executive Committee, including three-time major champion and former World No. 1 player Nick Price, and a new general counsel.

The other new nominees to the 15-member Executive Committee, a volunteer group that serves as the Association’s executive policy-making board, are Paul G. Brown, Kendra Graham and Sharon Ritchey. Richard A. Shortz has been nominated as general counsel.

“Once again, the USGA is the beneficiary of having an incredibly talented group of nominees,” said Jim Hyler, chair of the Nominating Committee and former USGA president. “These individuals have the best interests of the game in mind, and we look forward to them continuing the great work accomplished by the previous Committee.”

The Executive Committee candidates have a wealth of experience in industries that include golf, corporate business, finance and banking. Each nominee has already made selfless contributions to the sport at the local, amateur, collegiate and professional levels.

Get To Know USGA President-Elect Mark Newell, who would serve as the 65th president in the Association’s history. pic.twitter.com/RIpLLsh8lb

“We are extremely grateful for all the hard work of our outgoing Executive Committee members and general counsel, who have selflessly volunteered their time and expertise to the benefit of our mission for the past several years,” said Mike Davis, USGA CEO. “That includes a special thank you to Diana for her leadership, dedication and support over the past two years, which will have a lasting impact.

“The new nominee group truly embodies the mission of the USGA, by helping to make the game more accessible, playable, and enjoyable for everyone. Their expertise, insight, and knowledge will help grow the game in ways that will be beneficial for every golfer.”

Notable experience and achievements of the nominees are as follows:

Nick Price, of Hobe Sound, Fla., is a three-time major champion, World Golf Hall of Fame member and one of the best players of his era. A native of Zimbabwe, Price won 18 times on the PGA Tour, earned two PGA Tour Player of the Year Awards (1993, 1994), and spent 43 weeks as the No. 1 player in the world. He was the 2005 recipient of the Bob Jones Award, the USGA’s highest honor. Price competed five times for the International Team in the Presidents Cup and has served as captain three times, including 2017. In addition to his career on the course, Price has immersed himself in golf course design, with a portfolio of courses all over the world.

Kendra Graham, of Winter Park, Fla., worked for the USGA in Rules and Competitions from 1987 to 2003 and has devoted a lifetime of service to the game of golf. Graham was one of the first women to work as a Rules official at the Masters in 1994, and she was the first American woman to officiate at The Open Championship in 1995. She has worked as a Rules official for more than 20 major championships. A graduate of Wake Forest University, where she played on the golf team, Graham won several junior events and has competed in three USGA championships. A breast cancer survivor, Graham is an avid fundraiser for charitable efforts, including the American Cancer Society, Susan G. Komen For The Cure, and the Avon Breast Cancer Foundation.

Sharon Ritchey, of Asheville, N.C., has spent her career in the financial sector, most recently serving as senior executive director and chief customer officer for AXA US, one of the largest and most recognized insurance brands in the world. Prior to AXA, Ritchey worked at The Hartford Financial Services, where she helped support the sports marketing program, including the sponsorship of the PGA Tour’s Travelers Championship. Ritchey furthered her commitment to the game by supporting the creation of the women’s golf program at the University of North Carolina Asheville. A graduate of Eastern Kentucky University and the Kellogg School of Management at Northwestern University, she currently serves on the board of the LPGA Foundation.

Paul G. Brown, of Brookeville, Md., has nearly four decades of experience in the banking industry, most recently serving as executive vice president of City First Bank, the only bank in the nation’s capital that provides financial services to under-served communities in the region. Brown has served as an official at 35 USGA championships – including seven U.S. Opens – and is a member of the Junior Amateur Championship Committee. Brown earned his undergraduate and master’s degrees from Bucknell University.

Richard A. Shortz, of Los Angeles, Calif., has practiced law for more than 40 years, supporting major corporations and leading initiatives in the field of corporate governance. A junior club champion at age 15, Shortz has had a passion for golf throughout his life. At The Los Angeles Country Club, he has served in various roles, including chair of the club’s U.S. Open Committee. Shortz, a graduate of Indiana University and Harvard Law School, served in the United States Army as a second lieutenant.

Two current members of the Executive Committee have been nominated to serve as officers. They are Mark Reinemann as secretary and Thomas Barkin as treasurer. Other current members nominated to continue their service are: J. Michael Bailey, Stephen Beebe, J. Stuart Francis, Robert Kain, Martha Lang, Gregory Morrison, Clifford Shahbaz and William Siart.

For more information on the USGA, visit www.usga.org.