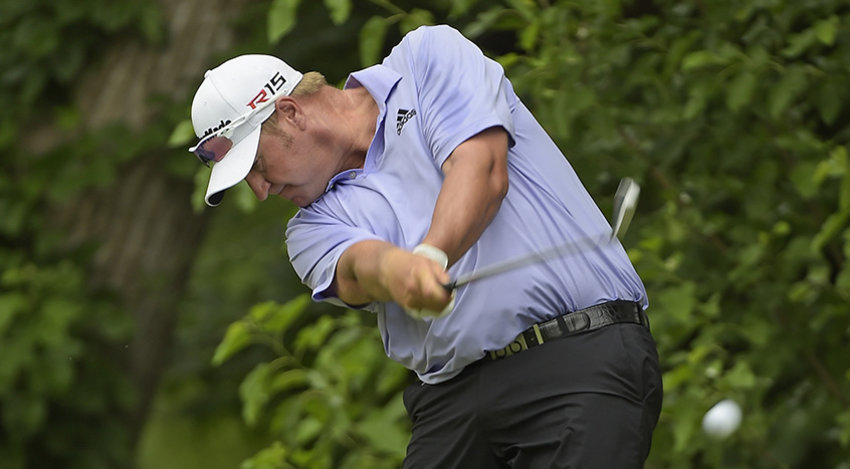 WICHITA, Kansas – South African Dawie van der Walt fired a 3-under 67 and moved into the clubhouse lead at the rain-delayed Web.com Tour’s Air Capital Classic presented by AETNA. The 32-year-old transplanted Texan is at 9-under 131 after two trips around the Crestview Country Club course, one better than Argentina’s Miguel Angel Carballo (65).

Overnight and early-morning storms caused a three-hour delay to the start of play Friday, which resulted in 24 players stuck on the course when darkness fell. That group will resume the second round at 7:30 CT Saturday morning.

Indiana’s Andy Winings is 4 under through 14 holes and currently at 8-under total. He will be among those returning to finish the second round.

“I’m just trying to do my own thing and not worry too much about the leaderboard,” said van der Walt, who won the Chile Classic earlier this year and is No. 13 on the Web.com Tour’s money list. “I’ve got a number in my head that I want to get to, and that’s all I can do and worry about. I can’t worry about what the other guys are doing.”

The former Lamar Cardinal has the same number in his head every week, regardless of where he’s playing.

“First, make the cut and then shoot 10-under on the weekend,” he said. “Every weekend, my target is always 10-under. I should be in pretty good shape if I can do that.”

His closest pursuer is Carballo, who carded a 5-under 65 despite hitting only four of 14 fairways and 10 of 18 greens in the second round.

“I’m playing well and I gave myself a lot of chances, and to come away without any bogeys is always good,” he said. “The idea is just not to give up too many shots to whoever is leading.”

Mabrey had a chance to challenge for the lead, but the recent University of Tulsa graduate was derailed by a double-bogey late in his round.

The difference was that Mabrey, who turned pro less than a month ago, busted out driver on the 456-yard, par-4 dogleg hole in Friday’s round after hitting hybrid in round one.

“I play a draw and there’s water on the left. I’ve blocked my shot to the right the first two days,” he said. “Yesterday I didn’t hit enough club to get out of bounds, but today I did. I hit driver and just put a bad swing on it.”

Mabrey bounced back on the next hole with a six-foot birdie putt and closed with a par and round of 67, all pretty impressive for a 22-year-old from Little Rock who is making his first Tour start, and the second of his career.

“I wasn’t as nervous as I thought I’d be,” he said. “I was pretty nervous on the first tee but after that, it’s just golf. It’s the same sport I’ve been playing my whole life. I think that helped me mentally prepare for this week.”

Currently the top Canadian in the field is Taylor Pendrith with a 3-under-par round of 67 today.