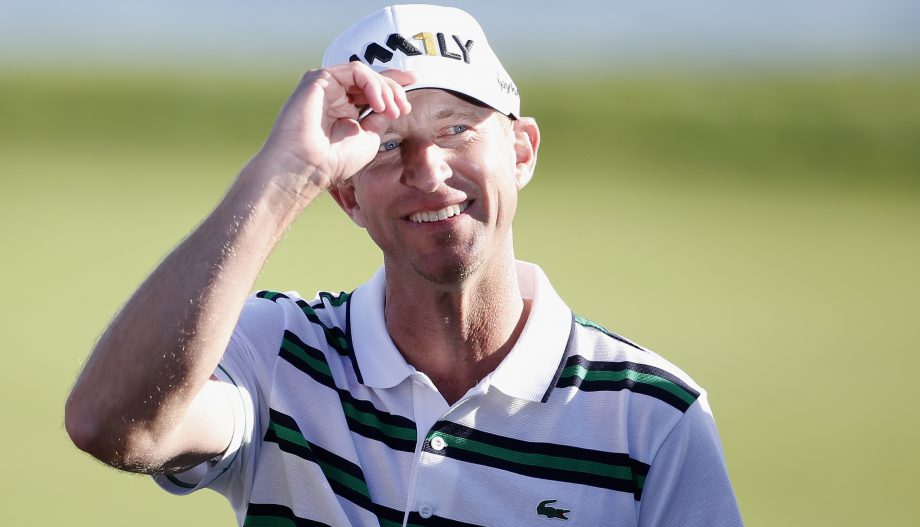 PEBBLE BEACH, Calif. – Vaughn Taylor doesn’t know how he lost his game. Even more mystifying was the way it returned.

His goal Sunday when he teed off in the AT&T Pebble Beach Pro-Am, trailing Phil Mickelson by six shots, was to finish in the top 10 so he wouldn’t have to rush down to Los Angeles and try to qualify for the next PGA Tour event.

It had been more than a decade since he won. It had been three years since he had a full PGA Tour card. And just 10 days ago, Taylor was throwing up in his hotel room in Bogota, Colombia, so sick that he withdrew from a Web.com Tour event and flew to Pebble Beach as an alternate. The one-time Ryder Cup player only had a carry bag with him to save money on baggage fees.

Taylor ran off four straight birdies on the back nine at Pebble Beach to close with a 7-under 65, and he wasn’t sure it was enough when Mickelson stood over a 5-foot birdie putt to force a playoff. And then Taylor got one last surprise.

“Just absolutely amazing,” Taylor said. “Didn’t know if it would ever happen again, to be honest. Just lost a lot of confidence, lost a good bit of my game. I just kept working, grinding and kept at it. And I can’t believe it actually happened today.”

Lefty was going for his record-tying fifth victory at Pebble Beach, and the 43rd title of his Hall of Fame career. He had a two-shot lead to start the final round, lost the lead after five holes, rallied with a birdie on the 17th hole and then delivered two good shots to within 60 feet of the hole, just short of the green on the par-5 18th.

“It never crossed my mind that I wouldn’t make that one,” Mickelson said after his 72.

Taylor had never given up on his career, though he was starting to rule out another victory, and he never imagined returning home to Augusta, Georgia, to play in the Masters. He is the first player this year to qualify by winning.

“Playing in the Masters is my Super Bowl,” Taylor said.

Taylor was No. 447 in the world and had never won a tournament against the best players. His previous two victories were the Reno-Tahoe Open (2004 and 2005), which is held opposite a World Golf Championship. He had a scare two years ago when his aluminum fishing boat capsized in a strong current, leading to a few moment of panic with cold water up his chin and a park ranger guiding him to shore.

Jonas Blixt, the first player to catch Mickelson, made bogey on the par-5 14th to fall back and closed with four pars for a 69 to finish third. Hiroshi Iwata of Japan, who played with Mickelson in the final group, was one shot behind until he missed the 16th green and made bogey. He closed with a 72 to tie for fourth with Freddie Jacobson (71).

Taylor didn’t look like much of a threat when he went out in 34, but he poured it on the back nine. He hit his approach to 3 feet on the 13th and to 12 feet on the dangerous par-5 14th. Coming out of the rough on the 15th, his ball hit the golf ball of Matt Jones and settled 2 feet away for a third straight birdie.

The real blow came at the 16th, a 30-foot birdie putt on one of the toughest greens at Pebble. He rammed it hard enough and watched it break back into the cup, and Taylor ran around the green to celebrate.

“I’ve had that putt before. It’s a hard putt,” Taylor said. “I wasn’t even thinking about making that putt. I knew it broke a lot, and it’s a little uphill at the end. It’s really easy to leave that putt short. I just flushed it. It was kind of going in from the start.”

He missed two good birdie chances on the last two holes, but still wound up a winner.

Taylor didn’t even realize he was in the Pebble Beach Pro-Am _ he still has limited status as a past PGA Tour winner _ until Monday when he was learned Cal Pettersen had withdrawn. That no longer is a problem. He’s in the Masters and PGA Championship, and he gets to set his own schedule for the next two years.

Jordan Spieth, the world’s No. 1 player, closed with a 66 and tied for 21st, ending his streak of seven straight top 10s dating to September.

Nick Taylor and David Hearn were the top Canadians, tying for 30th place at 5 under. Taylor shot a 1 under on Sunday while Hearn had a 2-over 74. Austin Connelly was 2 over for the day and finished at 1 over.

Mickelson at least left Pebble believing he was closer to ending the longest victory drought of his pro career that dates to the 2013 British Open.

“It’s certainly disappointing, but it makes me more determined to get back to work and get this thing right,” he said. “I know that I’m close to being where I want to be. But if I was there, I would have been able to finish it off.”

Canada’s Nick Taylor and and David Hearn had a share of 30th at 5-under, while Austin Connelly finished 1-over to tie for 60th.