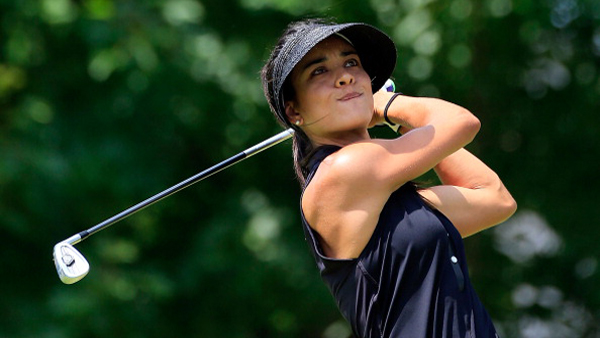 SYRACUSE, NEW YORK – Veronica Felibert shot a 6-under 65 on Sunday to earn her first career Symetra Tour victory at the Credit Union Classic presented by Wegmans.  Felibert birdied three of her final four holes to seize control and win by three strokes over Lindy Duncan.

“Oh my god, I’m very, very happy,” said 29-year-old Felibert.  “I’ve been working very hard and it is finally clicking so I am very, very excited.”

Phillips made double bogey on the 18th hole to give Felibert breathing room.  Felibert calmly stuck a stock 9-iron to three feet and tapped in for birdie to win on 18.

“The whole day was a little up-and-down, I shot 6-under with two three-putts.  I missed some short ones, but I kept believing in myself and even on the long putts I was trying to make them and it actually happened.”

After making the long putt on the 17th hole, Felibert felt destined to hoist the trophy.

“On 17, when I made the long putt, I had the feeling that when something is for you, it is for you.  It was meant for me at that point and nobody was going to take it.  Then, I hit my driver right down the middle on 18 and had perfect yardage to the pin and I hit a soft 9-iron and it just felt great.”

Felibert has played in 43 career Symetra Tour events over the last five years and was waiting desperately for this moment.

“I’m probably going to cry later because I know myself and this means a lot.  If you are a player or work on the Tour, you know I work very hard and being out here for so many years makes me realize I still haven’t been able to win and I feel so capable.  This is very special and I am just so happy.”

The winner’s payout of $15,000 moves her from 42nd on the Volvik Race for the Card money list to 11th with $27,941.  Felibert is off to play in the Meijer LPGA Classic presented by Kraft this coming week.  Now that she is on the cusp of the top-10 on the money list, she is going to reconsider her plans for the remainder of the season.

“I have to check if my schedule is going to change.  I’ve been trying to play as many LPGA Tour events as I get in and if I get a week off then I play Symetra Tour.  A lot will depend on what I do next week on the LPGA Tour.”

Most of Felibert’s family lives back in Caracas, Venezuela.  However, her friend from Brooklyn, New York took the train up to caddie for her this weekend.

“At least I had a friend that came from New York City on Friday night.  I picked him up at the train station and the train was late, it didn’t come until 11:00 p.m.  It was just very special to have him there and to have someone that I could talk to was pretty cool.”

Felibert had numerous people she wanted to share the win with that were not able to be in Syracuse.

“This is the best golf moment of my life and I want to share it with so many people that aren’t here like my parents, my sisters, my nephews and my coach, who has been so helpful to me over the last two years, and my sponsor arteasan.”

Lindy Duncan shot a bogey-free 5-under 66 to finish in solo second.  Her performance moved her from 29th on the Volvik Race for the Card money list to 16th.

Duncan made just one bogey over the final two days.

Numa Gulyanamitta, Calle Nielson and Garrett Phillips finished in a tie for third at 8-under 205.

On the Canadian side, Samantha Richdale claimed a top 10 5-under finish with a 67 in the final round. Maude-Aimee Leblanc  finished just behind her in a tie for 13th, after carding a final round 69.