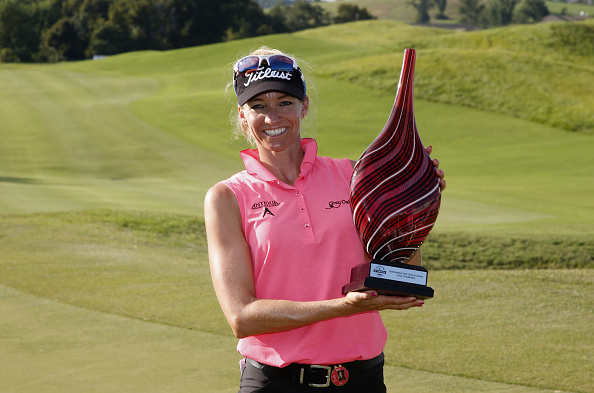 Tamulis played 29 holes Sunday in the twice-delayed tournament, the 186th of her LPGA Tour career. She finished a third-round 67 and closed with a 65 to beat Yani Tseng and Austin Ernst by a stroke.

The 34-year-old former Florida State player had a 17-under 271 total on The Senator Course and didn’t show the strain of being in contention with so little margin for error.

“It was amazing,” Tamulis said. “I was definitely not expecting this today.”

Tseng had rounds of 71 and 67, and Ernst shot 68-69 with the weather clearing up after delays totaling nearly 7 hours the previous two days. Both parred the final hole with a chance to force a playoff.

Tamulis birdied four of the first six holes in the final round before finally making her only bogey of the last three rounds. She hadn’t finished better than fourth on the tour.

Tamulis was all smiles at the end. She made a short birdie putt on the 17th hole, cheerfully telling two fans “28 of 29 completed today.” Then, a long birdie putt, hit seemingly perfectly on line, stopped inches shy of the final hole. Still smiling, she told her caddie the ball needed just “a little more oomph,” then chatted with the teenager carrying the score placard.

She had about 45 minutes to sweat it out. Tseng and Ernst both had makeable birdie putts on 18, on opposite sides of the pin. Ernst’s attempt went to the left. Tseng came closer, falling to her knees when her putt lipped out.

“When they both missed I was just shocked,” said Tamulis, who chatted with volunteers and had a snack in air-conditioned comfort instead of watching or practicing for a possible playoff. A friend kept her updated.

Tamulis had been fourth last year in Prattville and earlier this year at the Meijer LPGA Classic. She didn’t make the cut at last week’s Canadian Pacific Women’s Open after posting two 73 rounds. Her rounds steadily improved from 71 to 68 to 67 and finally 65.

It was her first win since Florida State but she had a pair of runners-up finishes in 2004 on the Symetra Tour.

Tamulis said she was trying to ignore the leaderboard, focusing instead on a countdown from 29 holes.

“The last time I actually saw where it was at was by accident on No. 9,” she said. “Then I felt really good and I was just out there trying to have a good time. My goal was to come in here have a decent week, play well and secure my spots in Asia.”

She also wanted to ensure she made the field in her hometown of Naples, Florida, for the season finale, the CME Group Tour Championship. Her expression matched the smiley face magnet affixed to her visor, given to her two years ago by an elderly scorekeeper in Phoenix.

Tseng is a 26-year-old Taiwanese player who ranked No. 1 for 109 weeks early in her career. She came close to snapping an 85-event winless streak dating to the 2012 Kia Classic, making a long birdie putt on No. 16.

This was Tseng’s second runner-up finish of the year.

Ernst was seeking her second tour win. Sydnee Michaels finished with a 67, finishing in a fourth-place tie with 2011 winner Lexi Thompson. Thompson closed with a 69 and was in the 60s all four rounds.

Hamilton, Ont., native Alena Sharp shot her best round of the competition, a 5-under 67, to reach 9-under and 12th place. Fellow Ontarian Brooke Henderson of Smiths Falls tallied four birdies en route to a 3-under 69 and a T13 finish.