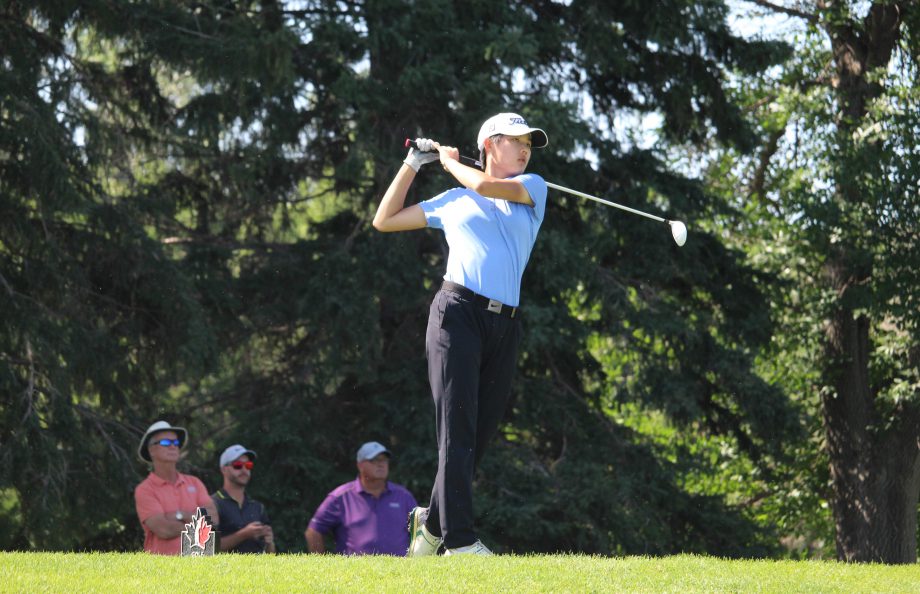 Liu shot 3 under 69, moving herself to 10 under for the tournament. Her 65 yesterday tied the old course record at Lethbridge Country Club – the record was broken by Euna Han only minutes earlier. Liu has only committed a single bogey through 36 holes.

“Today was a different round from yesterday,” said Liu. “Yesterday I had lots of birdie opportunities. Today was more of a regular day – lots of up-and-downs and some birdies too. I kept it real consistent today and made many great putts.”

This is the 16-year-old’s third appearance at the Canadian Junior Girls Championship. She finished in a tie for 13th and a tie for seventh in 2017 and 2018, respectively. Liu won the D.A. Points Junior Championship earlier in July.

“I think my putting’s been really good for both rounds,” added Liu. “I had some miss hits with my driver, but I saved them. Also, my mental game was key – I kept everything together.”

The low round of the day belonged to Tiffany Kong. The Vancouver product carded a 5 under par 67, bringing her score on the tournament to 7 under. She sits three strokes back of Liu heading into moving day.

Brooke Rivers (Brampton, Ont.) shot 4 under in round two, which included an eagle on the par-4 No. 14. Rivers is tied with Han, a Coquitlam, B.C. product, for third. Han carded 3 over on the day.

Team Canada National Junior Squad member Emily Zhu (Richmond Hill, Ont.) posted her second consecutive round of 70, moving her to 4 under for the tournament in fifth.

“The players did all the work – we came up with a good plan and they all stuck to it,” said Team British Columbia coach Colin Lavers. “It’s awesome for B.C. golf. We’re really proud and we’re trying to build a strong program. Results aren’t everything, but they are nice.”

This is Team British Columbia’s first time claiming the Mary Pyke Trophy since 2016 and they have now won three of the last five Inter-Provincial Team Championships.