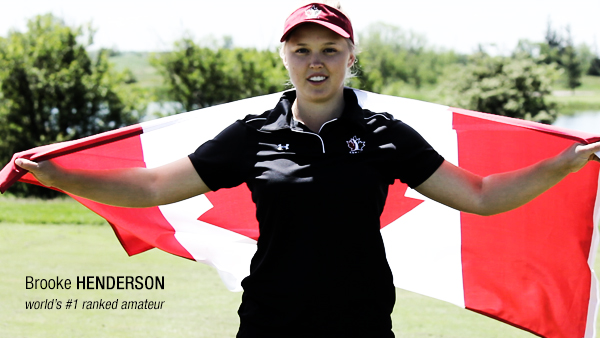 On Sept. 6, 2014, 16-year-old Team Canada athlete Brooke Henderson took over the no.1 spot on the World Amateur Golf Rankings (WAGR). This marks the first time in program history that a Canadian female has held the no. 1 spot.

Henderson, a Smiths Falls, Ont. native, learned the news after former no. 1 Minjee Lee of Australia turned professional following the World Amateur, allowing Henderson to move up from the second spot. She will be representing Canada in the World Junior Girls Championship later this month.

Below is a slideshow summarizing Henderson’s journey to no. 1 in the world.

Petro-Canada, a SunCor energy business, has announced they have increased funding to $10,000 for each recipient. Team Canada Development Squad member, Tony Gil, was one of 50 athletes and coaches to receive the financial assistance.

The Canadian Olympic Committee (COC), Canadian Paralympic Committee (CPC), and their National Sport partners work together each year to run the FACE program, which provides developing, pre-carded Canadian athlete and coach pairings with funding to help fuel their dreams.

“It’s wonderful to see renewed and strengthened support from Petro-Canada, who has supported Canadian athletes for more than 25 years,” said Marcel Aubut, COC president. “We look forward to cheering on the athletes as they continue to gear up for success on the world stage.”

The Men’s World Amateur Team Championship began Wednesday when 69 countries from around the world tee-it-up at 72 Golf East in Japan.

The men’s trio of Corey Conners, Taylor Pendrith and Adam Svensson have continued the success for Canada at the World Amateur Championship, firing a 10-under 134 to share the lead with Sweden and Switzerland after Wednesday’s opening round at Karuizawa 72 Golf East.

With the start of a new school year, Team Canada has three Development Squad members heading south of the border to begin their collegiate careers as freshmen.

With that said, there are a few ‘old folks’ on the National Amateur Squad who graduated from their respective schools:

Click here to read more on the selection criteria process.