Volunteers are the machine behind golf in Canada 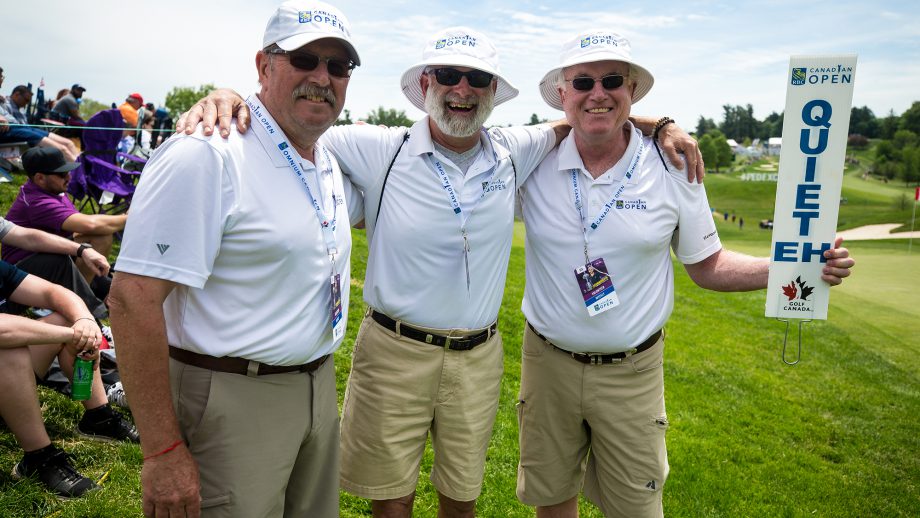 Volunteers. Golf in Canada can’t do without them and for many who try it, it becomes a life-long passion.

Tens of thousands, if not hundreds of thousands of Canadians volunteer every year at all levels of golf – from local junior events up to and including the RBC Canadian Open and CP Women’s Open.

“The volunteers at our recent Canadian Men’s Amateur Championship at Ambassador Golf Club in Windsor absolutely loved what they were doing,” said Golf Canada president Liz Hoffman, who enjoys attending tournaments and getting to hang out with volunteers.

“Whether they were walking scorers, spotters or bringing out water and fruit for the players they loved every minute of what they were doing, and it was contagious.”

Hoffman says if you consider all the roles and responsibilities volunteers have as part of Golf Canada’s board, councils and committees, helping at championships and qualifiers, or who serve as referees or work on handicapping and course rating and then factor everything that happens at the provincial level there is no doubt golf in Canada couldn’t function without them.

“They (volunteers) are integral, right across the country,” she says. “They’re the machine.”

Jim Clark, an Aurora, Ont., resident, first volunteered to work the Canadian Open in 1984 after hearing about it when he was curling.

“I was on the caddy committee,” he explains. “I just loved it. Standing in the parking lot at Glen Abbey and meeting the players as they got out of their cars.

In time, Clark became a governor of the Royal Canadian Golf Association (now Golf Canada) and he has worked every significant tournament Golf Canada has been involved in.

“It can be long hours and exhausting, but it gave me an energy,” he says. “It was the highlight of my year many times. That’s why I kept going back.”

Clark said volunteering in golf gave him a feeling of being part of a team and he loves to talk about the friendships he’s made through working golf tournaments and how volunteers come from all walks of life.

“We had a doctor who ran a parking lot at the Canadian Open,” he said. “He took a week off from his practice to direct cars in the parking lot.”

Hoffman’s introduction to volunteering in golf was not unlike Clark’s.

It happened in 2006 because the University of Toronto, where she was director of athletics and high-performance sport, was hosting the Canadian University/College Championship at Thornhill G&CC, where she’s a member.

After that experience she volunteered at the club level, then with Golf Ontario. And now, 15 years later, she is president of Golf Canada.

Both Hoffman and Clark agree that it’s not hard to get volunteers back for a second or third time because they see they’re making a difference and are having fun doing it.

“Once people do it they love it and they’ll go back,” said Clark. “The hard part is getting them out for the first time because some people can be intimidated by it.”

That’s one of the reasons Hoffman is on a crusade to broaden golf’s volunteer base in Canada.

“I’ve had so many parents come up to me and say, “if you ever need volunteers let me know because I’ll help in any way I can,’” says Hoffman who points out the reason they ask is because they simply don’t know how to get involved.

For starters, you don’t have to be a great golfer or even a golfer, period.

“We welcome applications from all individuals who share our values and may contribute to increasing equity diversity and inclusion in our sport,” says Hoffman. “We want to look inside and outside our sport.

“We want to broaden our volunteer base and underrepresented groups are key. We need to make sure we reach out to them and let them know who we are and how to get involved.”

Golf Canada has made it simple to sign up as a volunteer. For starters, you can simply go to www.golfcanada.ca/volunteer-opportunities to get more information on how to volunteer with Golf Canada.

Or if you prefer, you can call Golf Canada or your provincial golf association and ask, “how do I volunteer?”