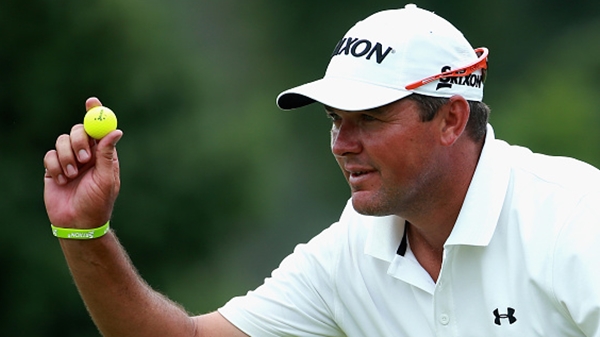 JOHANNESBURG – Wallie Coetsee holds a one-shot lead at the Joburg Open after a 6-under 65 on Friday put him 12 under par and at the front of a group of South Africans.

Coetsee leads from fellow home players Garth Mulroy and Tjaart van der Walt at the halfway mark of the European Tour event in Johannesburg, with England’s Simon Dyson also tied for second at 11 under.

Coetsee opened with a 66 on the tougher, par 72 East Course on Thursday, and took his strong form onto the par 71 West Course in the second round.

Coetsee had three straight birdies to start and finished with five birdies and an eagle in all, and just one bogey.

“Somebody must wake me up, it feels like a dream,” he said.

An extra bonus could await Coetsee with the leading three players in the top 10 at the Joburg Open not already exempt qualifying for a place at the British Open at St. Andrews.

Mulroy carded a 68 and Van der Walt a 69 on the East Course. Dyson, also on the East, had six birdies and a bogey in his 67.

Players play a round each on the West and East courses before play moves to the East Course for the weekend.

New Europe Ryder Cup captain Darren Clarke was at 1-over 144 after two rounds to miss the cut at Royal Johannesburg and Kensington.