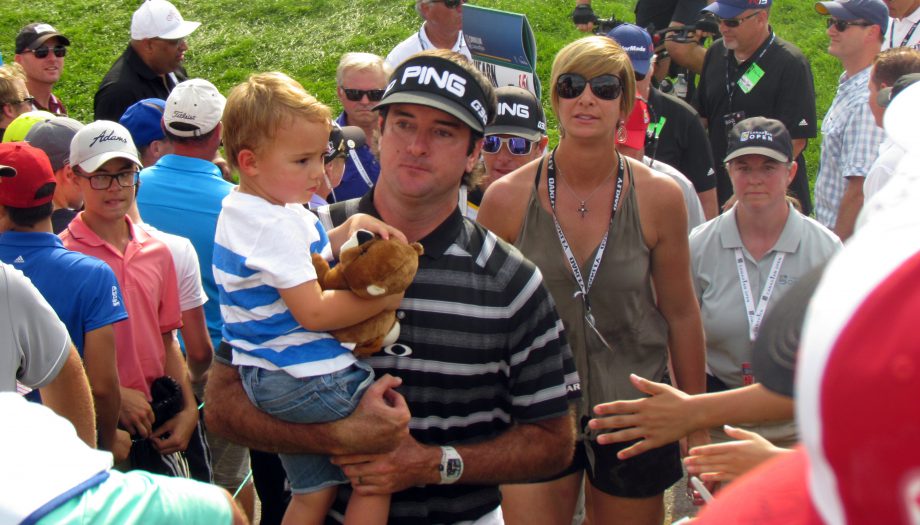 When one of the most popular and successful golfers in the world holds a strong connection to Canada that’s definitely worth highlighting.

Given the fact that his wife is Canadian, competing north of the 49th parallel holds a special significance for two-time Masters Champion, Bubba Watson.

Having met during their days as student athletes at the University of Georgia, Watson and his wife, Angie, were married in 2004; and today, are the proud parents of two adopted children – a son named Caleb and a daughter named Dakota.

Last month at Glen Abbey Golf Club, the American golfer was eager to speak about the importance of competing in Canada at the RBC Canadian Open.

Specifically, he talked about the significance of being able to spend time with his wife’s parents who live in Markham, Ont., as well as, her grandparents who flew in from Newfoundland to take in this year’s tournament.

As well, he beamed about how his three-year-old son got to meet his 80-year-old great grandmother.

Given his strong connection to Canada, the 36-year-old from Florida also spoke hypothetically about what it would mean to win the RBC Canadian Open.

“I’ve got two flags at the house, so it’s a big deal. It would be a great honor, but a big deal for the family as well,” said the eight-time PGA TOUR winner.

When the tournament got underway, the 6 foot 3 inch golfer put on an impressive display of power off the tee and soft hands around the greens; and showed the golfing enthusiasts at Glen Abbey why he is currently one of the best in the world.

Watson’s popularity was evident from the size of the gallery following him, as he flirted with victory, before finishing runner up to Australia’s Jason Day.

Brent McLaughlin, the tournament director of the RBC Canadian Open, understands why fans so are drawn to Watson and his game.

“Bubba is obviously one of the biggest names on tour right now. He’s in his prime and people love to watch him.  He’s a great ball striker and works the ball in so many different ways that people are constantly baffled by,” McLaughlin noted.

“He’s almost like an honorary Canadian. It’s like a home tournament for him and Bubba likes coming home; and it’s great for his wife to get some friends and family involved,” added the tournament director.

As one of the popular Canadian stars on the PGA TOUR, David Hearn agrees with McLaughlin about Watson’s entertaining style of golf.

“He plays a game with which nobody else on this tour is familiar with. He hits the ball incredibly long and hits some shots that most players don’t try to attempt,” said Hearn last month after learning he would be paired off against the American in the final round of the RBC Canadian Open.

Even though he was matched up in the final round against the Canadain grown hero from Brantford, Ont., Watson says the crowd support was not one sided at all.

“I think Canada and the crowd were treating me just as fair as David since my wife’s Canadian,” said Watson, who also referred to himself as half Canadian in the media scrum after completing his final round.

Despite coming in second, the golfer that many insiders of the sport have referred to as ultra competitive and hot-headed, seemed at peace with the result after completing the 18th hole; and genuinely happy to finally spend quality time with his family.

Watson explained his new lease on life best during his pre-tournament press conference when he spoke candidly about how his family – particularly his children – has changed his perspective on what’s most important.

“I don’t know if you ever checked media, but they wrote me as a head case, and I agree with that. I was a hot head. I wanted to play better,” he said.

“But I think (having) kids, it makes you realize what’s more important. My son could care a less what I shoot. He could care a lot less. All he knows is daddy’s done and now we can go play,” he continued.

“So it puts life, not just golf, but it puts life in perspective. What is the most important and then it shows that golf is just a game,” Watson added.

Still, golf is a game that he plays better than almost anyone else on the planet. With two titles and seven top ten finishes so far this season, Watson is currently sitting in second place in the FedEx Cup Standings and third in the official world rankings.

At 36 and very much in his prime, Watson appears poised to take a legitimate run at the distinction of being world No. 1 in 2016.

While many acknowledge that golf is a mental game which is often played between the ears, the fact that Watson now has a happier balance between life on and off the golf course can only benefit him in his quest to be the best in the world.

And as Watson has highlighted, his extended family north of the 49th parallel play a significant role in creating that happy balance.

Ultimately, this translates to a greater likelihood that the many Bubba Watson fans in the country will see the two-time Masters Champion on Canadian soil vying for the RBC Canadian Open title every year in July.