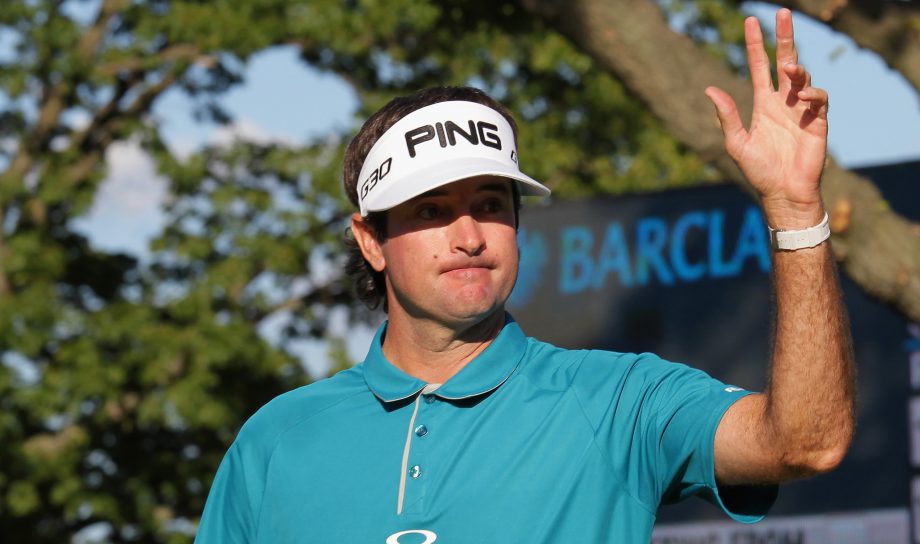 EDISON, N.J. – Jordan Spieth lost out on a chance to play the weekend at The Barclays.

He also lost his No. 1 ranking.

Bubba Watson, momentarily distracted by a rare warning for taking too long to play a shot, recovered with a birdie on the 18th hole at Plainfield Country Club for a 2-under 68 and a one-shot lead going into the weekend at the opening FedEx Cup playoff event.

On an otherwise sleepy afternoon at a course where no one could get some separation, two peculiar moments stood out – a bad time for Watson, bad golf from Spieth.

Trying to rally to make the cut, Spieth hit into a hazard on the 12th hole, and a bogey later became a double bogey when he was penalized one shot for stepping on his ball during the search. He had a 73, the first time since the Tour Championship last year that he had consecutive rounds over par.

He missed the cut by five shots. That means Rory McIlroy, who isn’t playing this week, returns to No. 1.

“I’ve reached that peak already and I know it’s going to be close enough to where if I just get the job done next week, I’ll be back in that ranking,” Spieth said. “But again, that ranking, it’s great once you reach it but it’s not something that I’m going to live or die on each week.”

McIlroy becomes the 14th player since the world ranking began in 1986 to get to No. 1 without playing that week.

Watson is in good shape through 36 holes to claim his own No. 1 ranking – a victory would move him to the top of the FedEx Cup. Much like the world ranking right now, that figures to change by the week.

Ultimately, what matters to Watson, Spieth and others is winning the Tour Championship to capture the $10 million bonus.

Halfway through this event, no telling what else will happen over the next two days.

PGA Tour rookie Justin Thomas had a few late bogeys for a 69 and shrugged when asked if he was happy with his score. He was seven shots back.

“This is a course where if you make the cut, you have a chance to win,” Thomas said.

British Open champion Zach Johnson made five birdies to go with four par-saving putts from outside 8 feet for a 65. He was one shot out of the lead, along with Henrik Stenson (66), Tony Finau (69) and Jason Dufner (68).

Watson typically struggles on courses with blind shots, and Plainfield has plenty of them. But he’s picking out targets, smashing his driver close to the green on the shorter holes and getting by just fine.

The bad time came on No. 16 with a difficult pin position, made even tougher by the fact Watson watched Spieth’s shot roll back some 100 feet off the green. Watson took longer than 40 seconds – 1 minutes, 2 seconds to be exact – and was given the bad time. One more bad time would have led to a one-shot penalty. Watson said he rushed his next shot from the fairway and came up 30 yards short of the green, leading to bogey.

Asked about his round, the first thing he brought up was the bad time, which he thought was “hilarious.” He spoke to the rules official after the round.

“I told them, `I’m not mad at anybody about the bad time.’ I went over the time, which is the right ruling,” he said. “It’s just on a hole like that, one of the toughest holes we’ve ever played besides 2011 when we played the same pin placement, it’s very difficult.

“But yeah, I’m very happy about my round,” he said. “I’m excited where I’m at. I made the cut and I’m in the last group. Hopefully, I’m here talking to y’all tomorrow about something else crazy that happened.”

Spieth made 10 bogeys and two double bogeys over 36 holes. He had one stretch on the front nine of four bogeys in five holes. The exception was a birdie. But after starting the back nine with back-to-back birdies to get within two shots of the cut line, his long approach on the par-5 12th found a hazard of thick grass.

Spieth said he told his caddie he was going to play the shot if he could see the ball, and take a penalty drop if he could not see it. Instead, he stepped on it. He thought because he announced that he might take a penalty that stepping on the ball didn’t matter. Spieth, instead of getting into a long explanation with a rules official on the next hole, waited until after the round and accepted the additional one-shot penalty.

Ultimately, it didn’t matter. He still missed the cut for the third time this year. He has a week before he tees it up next week in the TPC Boston, which has a Labor Day finish. And he sounded frustrated when he said, “I’m definitely searching for answers.”

Some players have a month to search by missing the cut, making it impossible to move into the top 100 in the FedEx Cup and advance to the top 100. That group included Tim Clark and Graham DeLaet. Adam Scott also missed the cut and is likely to fall out of the top 100 at the end of the tournament Sunday.

Brantford, Ont., product David Hearn followed up an opening-round 70 with a round of 69 to reach 1-under 139 and a share of 32nd place. Nick Taylor is even-par  and sits T40.