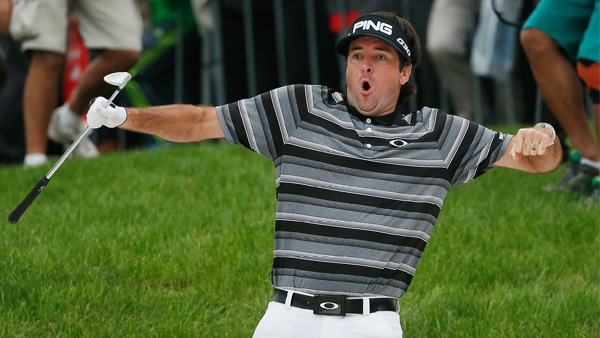 SHANGHAI — Even in the midst of a meltdown, Bubba Watson never lost hope Sunday in the HSBC Champions.

He stood on the 16th tee with a two-shot lead. He trudged off the 17th green facing a one-shot deficit behind five players suddenly tied for the lead. And right when it looked as though Watson had blown it, he delivered a finish that not even the creator of “Bubba golf” could have imagined.

From some 60 yards away in a bunker left of the green on the par-5 18th hole, Watson blasted out of the sand and watched his ball roll 25 feet before it dropped for eagle. Watson was so stunned that his eyes widened and he screamed. He didn’t know what else to do.

Moments later, he rolled in a 20-foot birdie putt on the 18th in a playoff to beat Tim Clark and capture his first World Golf Championship.

“You never know what he’s going to do,” said Rickie Fowler, who watched it all unfold at Sheshan International.

Watson closed with a 2-under 70, a score that doesn’t even begin to describe his wild ride – an eagle, birdie, par, bogey and double bogey filled his scorecard over the last five holes.

The two-time Masters champion looked like a lost cause when he stood in the bunker on the 18th in regulation, waiting his turn to play. That’s when he turned to his caddie and told him, “It’s been a miserable couple holes here, but this will change everything if it goes in.”

Talk about a Shanghai surprise.

“You always joke about holing it,” Watson said. “And then it actually went in. I didn’t know how to react and so I just kind of screamed, and I lost my voice a little bit. It was one of those shots, a one-in-a-lifetime kind of shot. And so it was pretty neat.”

The 10th edition of the HSBC Champions was the most memorable one yet.

Clark made a 5-foot birdie on the final hole for a 69 to join Watson at 11-under 277. Fowler’s hopes of joining them ended when he tried to hit a 5-wood from 228 yards over the water to a back pin position. The ball didn’t make it over the front bank and rolled back into the water. He scrambled for a par and a 70.

All three players in the final group had a chance at birdie to join the playoff.

Graeme McDowell, who led after each of the three rounds, missed a 12-foot putt and shot 73. Hiroshi Iwata of Japan, the mystery guest on a world-class leaderboard, narrowly missed from 8 feet. U.S. Open champion Martin Kaymer hit a wedge that bounded off the green and into the water, leading to double bogey and a 73.

In the playoff, Clark had a 25-foot birdie putt that stopped a few inches short.

“I knew I needed to birdie that playoff, especially with him being able to reach,” Clark said. “I’m pleased overall. Obviously, disappointed to be that close.”

Watson wound up in the same bunker in the playoff, and while he blasted out 20 feet short, the birdie putt was on the same line as the bunker shot he holed in regulation. He knew the speed and the break. The only difference was when he holed the winning putt, he didn’t have a voice to scream. He bent his knees and repeatedly pumped both arms.

Watson became the 14th player to win a major and a World Golf Championship. Watson moved to No. 3 in the world, making him the highest-ranked American, and it was his sixth career win. Sweeter yet, he picked up a trophy far away from home.

“Being able to win outside the U.S., I just want to be able to travel and get through the jet lag, get through all the things and still perform at a high level,” Watson said. “So for me to win out here, this is very big. This is very special for me.”

That the other five players even had a chance was a bonus.

Watson was 89 yards away from the 16th green when he hit a lob wedge heavy and missed the green, such a bad spot that he did well to keep his chip on the green about 20 feet away. He two-putted for bogey. Then, he found a bunker left of the green on the par-3 17th and couldn’t negotiate the soft sand. Using a 56-degree wedge, he left the first shot in the sand. His next one went off the green and onto the fringe, and he two-putted for double bogey.

When the final group behind him walked onto the 16th green, they were so stunned to see a five-way tie for the lead, they asked to make sure it was accurate.

“That’s why I went for the green on 16,” Kaymer said. “I thought if I can make 3 there, I can square with Bubba. And I saw that he made double bogey on 17, so all of a sudden, there were five guys in the lead.”

Watson at that moment appeared to be the least likely of the bunch to hold the trophy. It only made sense later when he was asked why fans find him so intriguing.

“They never know what they’re going to get,” he said.