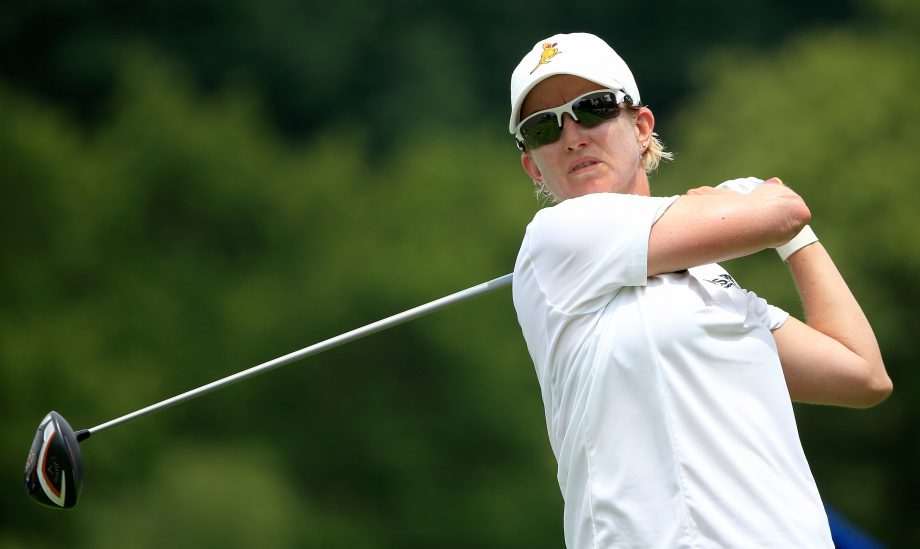 LANCASTER, Pa. – Atop the leaderboard, veteran Karrie Webb and second-year LPGA Tour player Marina Alex did their best to temper expectations at the U.S. Women’s Open.

Both early starters opened with a 4-under-par 66 on Thursday, and that score held up through the afternoon before things turned wet and windblown. Play was suspended in the early evening after a storm packing high winds, lightning and heavy rain pounded Lancaster Country Club.

The sudden halt to the action with 55 players needing to complete their rounds – with at least two threatening the lead – left Webb and Alex as unlikely co-leaders.

Amy Yang was in the clubhouse a shot behind the leaders. Two players on the course were also at 3 under: Na Yeon Choi, the 2012 U.S. Open champion, had three holes to play, while Jane Park had five.

Top-ranked Inbee Park birdied two of her last three holes before play was stopped and was at 2 under through 14. Morgan Pressel and six other morning starters shot a 2-under 68.

The 40-year-old Webb reeled off four birdies on her second nine holes and finished with her first score in the 60s in a U.S. Open since 2001, when the Australian won the tournament for the second straight year.

The seven-time major champ started on the back nine and reeled off 10 straight pars before making her move with birdies at the second, fourth, sixth and eighth holes.

This season has been a struggle for Webb, who has three top-10 finishes in 14 starts. That all changed Thursday when she hit 14 fairways and 17 of 18 greens.

“It’s been a test of my patience. I feel like I’ve had some good golf in me,” Webb said.

An eighth major title would move her into a tie for sixth place with Betsy Rawls, but Webb said it was too early to think about that.

“That’s never been a goal of mine,” she said. “I’m just happy to get off to a good start and hopefully continue to play this good for the next three days.”

Alex, playing in her second U.S. Open and first since 2009, was a surprise atop the leaderboard. The 24-year-old from Wayne, New Jersey, is in her second season on the LPGA Tour. She missed the cut five straight weeks and her best finish was a tie for ninth in Arkansas.

She’d been working on swing changes before the tournament, and it finally all came together.

She hit a 5-wood to within 18 feet on the ninth hole and made a curling birdie putt.

“It was the best putt and best shot of the day for me, so that was great,” she said.

Alex was an amateur when she played in her first U.S. Open.

“I qualified like the last spot on my sectional,” she said. “My game then and now is not even remotely the same. I was a nervous kid, pretty much.”

On Thursday, she embraced the championship atmosphere and cheering crowds.

“I’m not a front-runner for this tournament, really,” she said. “So I’m just going to go out there and have fun tomorrow with my caddie and just keep doing the things that we’ve been doing and just see where that puts me.”

Elizabeth Nagel, a 23-year-old playing her second professional event, was in the group two strokes off the lead. Making her U.S. Open debut wasn’t going to rattle the cancer survivor.

After a trip to her doctor because of cold symptoms during her junior year at Michigan State, Nagel was diagnosed with thyroid cancer. She had surgery to remove her thyroid and cancerous lymph node in her neck. Nagel went through radioactive iodine treatments and was declared cancer free about a year later.

“It kind of brings all this into perspective and makes this even more special,” she said. “Everybody says it, but when you make a bogey you keep pressing on. When you’ve heard the `C’ word and went through that whole battle really in your life, it brings everything back to even keel.”

Stacey Lewis, who finished second last year, shot a 69, while Lydia Ko opened with 70, and defending champion Michelle Wie, slowed by injury and illness this season, shot a 2-over 72.

Canadian Christina Foster made her professional debut today with a round of 1-over par 71. Currently Brooke Henderson sits at 1-over par with two holes to play tomorrow to complete her first round.